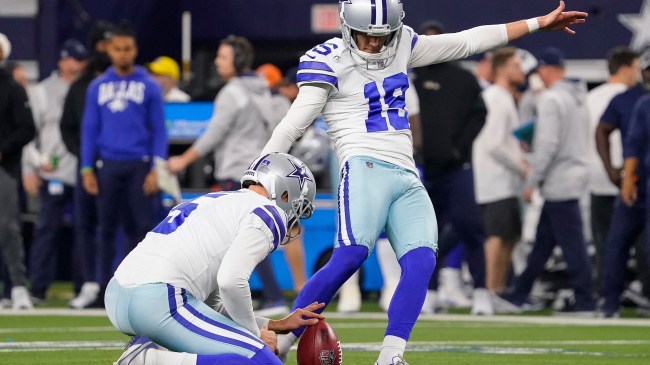 I’d argue you can’t really call yourself a true football fan until you know what it’s like to be traumatized by a kicker who choked under pressure with the game on the line (as evidenced by the involuntary eye-twitching you’ll likely observe if you utter the words “wide right” in a bar in Buffalo).

The Cowboys were able to avoid befalling that fate during their decisive 31-14 win over the Buccaneers in their wild card showdown on Monday night. Most members of the Tampa Bay roster would probably prefer to forget that contest, although they still have nothing on the regret Dallas kicker Brett Maher felt following one of the worst performances in NFL history.

As you likely know by now, Maher—who converted 50 of the 53 extra points he attempted during the regular season—failed to convert on four consecutive PATs before finally managing to split the uprights on his fifth try. While Jerry Jones has insisted the Cowboys have no plans to explore other options, Maher still failed to inspire much confidence ahead of their upcoming game with the 49ers.

There were plenty of people who floated a fairly ridiculous and baseless theory suggesting Maher had some financial incentive to miss the kicks in a game where the four points he left off the board meant a lot to bettors who wagered on the over. However, others have floated a slightly more plausible explanation.

Before the postseason kicked off, the NFL informed its officials to keep an eye out for “foreign objects” that could be deployed during field goal and PAT attempts after the Eagles were reportedly caught using an illegal aid during a game against the Giants in Week 14.

It didn’t take very long for others to try to connect to dots during Maher’s historic implosion, as that report was repeatedly cited by fans who speculated he may have fallen victim to the crackdown.

Nfl cracks down on foreign objects on field goals and Maher can’t make an XP. Coincidence?

Maher just missed his third PAT. Could his holder have been the one using a foreign object to aid kicks?

Three misses in a game@is unheard of.

At the end of the day, the most obvious explanation is probably also the correct one: Maher got in his own head after the first miss and was unable to escape the downward spiral we were subsequently treated to.

With that said, the truth has rarely gotten in the way of a good conspiracy theory.