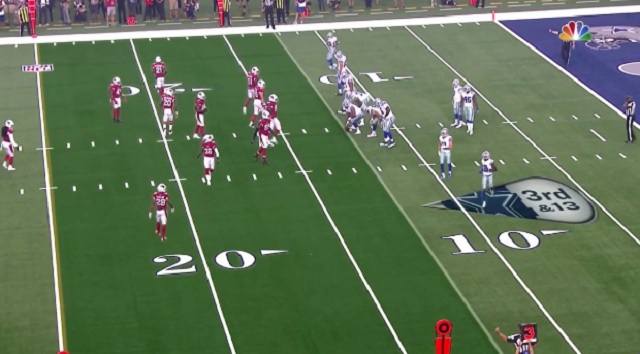 The Green Zone is used on third downs and is meant to show viewers how far a team has to go to get a first down.

You didn't even know that you needed a "Green Zone" to watch NFL games, did you! pic.twitter.com/1JBcNkmP7X

Welcome to the green zone.

On third downs, see just how far players will have to go at any point during the play to get a first down. pic.twitter.com/cCLdkdLjls

Of course viewers immediately hated the Green Zone and took to Twitter to immediately crush it on Twitter.

I appreciate the effort, but please immediately remove the “Green Zone” from all future broadcasts

Not a fan of the GREEN ZONE pic.twitter.com/kFv8oGnZ4X

"Pretty soon we're going to have nothing but green zone on the screen". I don't know if it's been realized yet, but the football field is green.

Someone give me a crying Jordan face on the Green Zone, now. I’m too lazy to start up my computer. #SNF #ARIvsDAL https://t.co/v6lNXOVpPn

Of course Colin Cowherd had to take the contrarian view.

I like the Green Zone. Good idea. I’m sure Twitter will react w thoughtful nuance for its debut. #snf