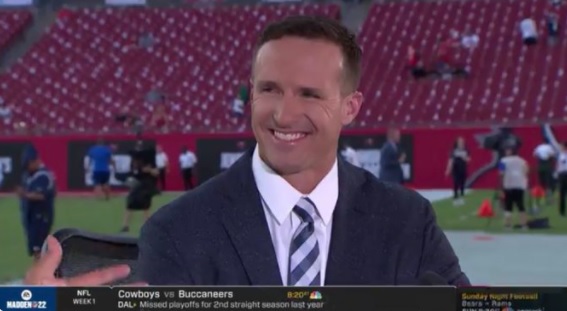 Drew Brees made his broadcast debut during NBC’s pregame show for the NFL’s season-opening game between the Bucs and the Cowboys.

The recently retired Saints QB, who signed a longterm deal with NBC, is reportedly being groomed to replace Chris Collinsworth in the not-so-distant future.

Prepare for a potential shake-up in the SNF booth@AndrewMarchand told @ColinCowherd that NBC has a secret plan for Drew Brees pic.twitter.com/Lj3lER7mqX

During his broadcast debut, Brees was sporting a full head of hair which threw fans off considering he’s been balding for years.

TRIGGER WARNING FOR THOSE LOSING THEIR HAIR IN THEIR 30s & 40s:

Drew Brees has clearly been spending his retirement, um, growing his hair, um, for television. pic.twitter.com/nHkoYWBLGA

I did not recognize drew brees with hair like that

Wtf is on your head Drew? pic.twitter.com/IivwbLqgF2

Drew Brees' hair has made a huge comeback. He looks like a new man https://t.co/aNYNxFKxmm