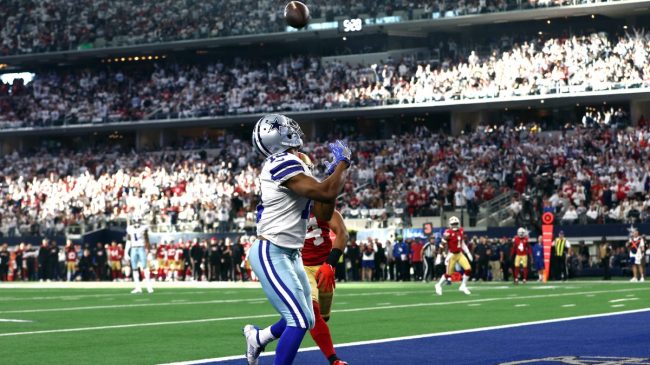 The Dallas Cowboys/Amari Cooper honeymoon may be coming to an abrupt end.

After three and a half seasons in the Lone Star State, it appears that the Cowboys are eager to cut ties with the talented wideout despite his having posted some pretty productive campaigns.

Dallas was reported to have been set to release the four-time Pro Bowler, but some new interest from NFL teams is now changing that line of thought.

It appears that the Cowboys are now shopping Cooper around, seeing if they can get something in return for the services of the 27-year-old star. After all, he’s just one season removed from back-to-back 1,100-yard outputs.

While he experienced a down year in 2021, there are certainly some teams that would be willing to take a chance on bringing in a young wide receiver. Especially one that’s proven to be a reliable No. 1 option.

What Dallas is looking to get rid of is the $20 million per year price tag that comes along with keeping Cooper on the roster. Just two seasons ago, the organization rewarded the receiving threat with a five-year extension worth $100 million.

Now, they’re backtracking in an attempt to open up some salary cap space.

Obviously, getting the $20 million off the books would allow the Cowboys to be more flexible, but a trade situation would be beneficial to suitors, too.

Rather than battle on the open market, teams can restructure Cooper’s current deal as they see fit.

With Dallas now fielding calls as opposed to just cutting Cooper, a new timeline has emerged on when we might hear some more news.

Timeline Emerges On When An Amari Cooper Deal Could Get Done

Jane Slater, an NFL insider covering the Cowboys, released a statement earlier today in regards to when we might hear some news on Amari Cooper.

If he’s on the books on 5th day of league year #Cowboys on hook for 20M. Opposing team gives up a draft pick like #Cowboys did but get an immediate impact player. More on NFL Now at noon CT https://t.co/0ZBufmLrs1

It looks like Dallas may wait until sometime next week to make their decision on Cooper. The new league year is set to begin on March 16, exactly a week from today. That begins the free agency and trading period within the NFL. We could hear some news over the following weekend.

While some teams are hesitant to bite on trading for the wideout, others have surely shown interest. Most notably, the New England Patriots appear to be emerging as a prime candidate.

Amari Cooper is (+250) to join the New England Patriots 👀

It does appear that a split between Cooper and the Cowboys is now imminent. The team has turned their attention towards signing WR Michael Gallup instead.

As for #Cowboys WR Michael Gallup I’m told a deal is getting closer and could hear news of that deal soon. No news or progress still in the way of DeMarcus Lawrence. I should remind you how bleak the last talks were for a contract and then it got done so wait and see here too.

We just have to wait a bit longer to find out exactly what those plans entail.