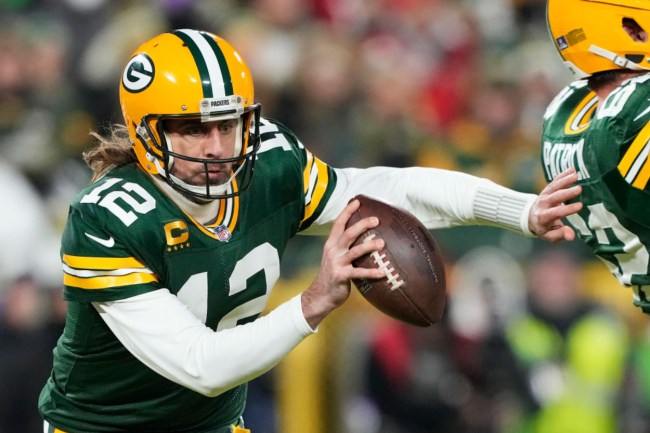 Hub Arkush, one of just 50 NFL MVP voters, told the world back in January that he wouldn’t be voting for Aaron Rodgers. His stance on the Packers’ QB had nothing to do with his play on the field, however, he just thought he was “the biggest jerk in the league.”

Arkush stayed true to his word, telling 670 The Score in Chicago that he was the lone person to vote Cooper Kupp for MVP. Rodgers ultimately earned 39 votes, Tom Brady picked up 10, and Kupp, of course, had the lone nod from Arkush.

The Chicago-based sports writer simply couldn’t get past the fact that Rodgers made the decision to not get vaccinated or the “I was immunized” debacle that dominated headlines earlier in the season.

“I don’t think you can be the biggest jerk in the league and punish your team, and your organization and your fan base the way he did and be the Most Valuable Player,” Arkush said back in January.

“We are told to pick the guy who we think is most valuable to his team. And I don’t think it says anywhere, ‘strictly on the field,’ although I do think he hurt his team on the field by the way he acted off the field. They’re gonna get the No. 1 seed anyway, but what if the difference had come down to the Chiefs game, where he lied about being vaccinated, and they ended up getting beat?”

Just like any other opinion these days, Arkush had his supporters on social media but also had his fair share of critics.

Rodgers himself responded to Arkush and did his fair share of name-calling as well.

At the end of the day, this entire gripe shows that some people simply do not deserve an NFL MVP vote.

If you can’t separate what really matters (Rodgers’ performance on the football field) and what doesn’t matter in the scope of the award (the way Rodgers carries himself and his decision about receiving a vaccine) then you shouldn’t have a vote.