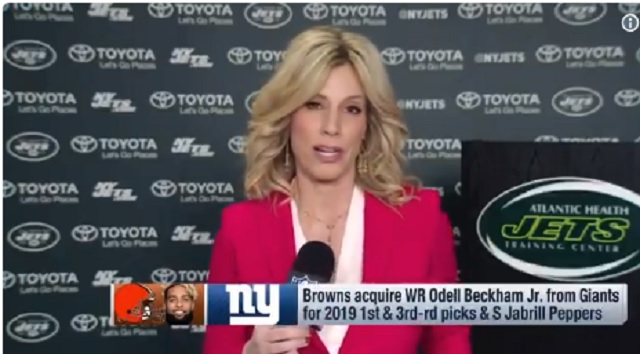 While Odell Beckham is no longer in New York after being traded to the Browns there is going to be a lot of talk in the next few weeks regarding his behavior during his tenure with the Giants.

We’ve already heard reports that Beckham was traded by the team because he “had become too much of a pain in the ass”.

He had become too much of a pain in the ass,” said one source familiar with the situation. “And there was a real fear that eventually it would get worse.”

It was “absolutely not a football decision,” according to one team source. The Giants are well aware that replacing Beckham on the field might be impossible.

While the narrative from media members in NY surrounding Beckham is that he is a terrible/selfish person, NFL Network’s Kimberly Jones paints a different picture of the superstar wide receiver.

This afternoon Jones revealed a touching story on how Beckham once reached out to her when she came back to work after suffering a serious medical emergency.

A personal note on the Odell Beckham Jr I know. Wishing @obj much success with the #Browns. @nflnetwork pic.twitter.com/nmmh4elbGJ

I want to touch on a personal memory…It’s no secret that I had a serious medical issue in November, an aortic dissection, I ended up missing 46 days of work here at NFL Network, now in that time I was allowed to come into the Jets and Giants locker rooms in an unofficial capacity just to say some hellos and to get back in the swing of things, well my first day of work was with the Jets on December 31st, New Years Eve, 7pm that night I got a text from Odell and it simply had a video of me interviewing him after a Giants win a couple seasons ago… and he wrote simply I’m still happy that I still get to see you in 2019. That is who in my experience Odell Beckham Jr. is.

Kimberly Jones is the 🐐. What the @Giants are trying to do to @obj's name is a disgrace and I'm disgusted with the team I support. https://t.co/WvDUZtKMGX

Nice job to share the human being not just the media hype . We are all glad to see you again in 2019 @KimJonesSports