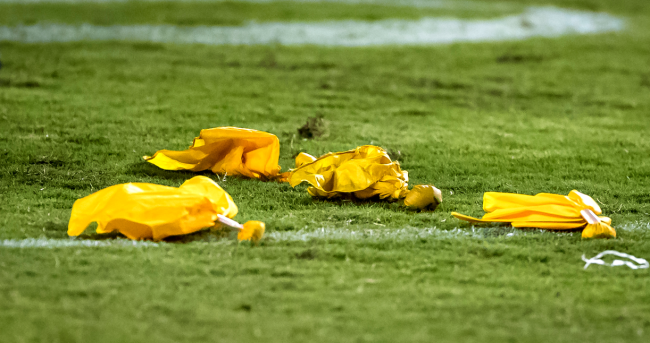 The NFL has reportedly told officials to focus more on illegal contact fouls this season.

According to ESPN report, a league spokesperson confirmed on Monday that the NFL has asked its officials to put a greater emphasis on illegal contact fouls during the upcoming season.

Illegal contact penalties can be called if a defensive player makes contact with a receiver more than five yards off the line of scrimmage while the quarterback has the ball and is in the pocket. If called, it is a five yard penalty and an automatic first down for the offensive team.

In administering illegal contact, officials must first identify the prohibited contact and then confirm the position of the ball and quarterback. The committee encouraged officials to move more quickly from the contact to the quarterback, in order to better enforce the foul.

League sources surveyed by ESPN were split on whether the wording of this year’s illegal contact instructions will lead to a spike in flags, as occurred after the two previous points of emphasis for the foul. In 2014, flags illegal for illegal contact rose to 148 from 52 in 2013. In 2004, they rose to 191 from 79 in 2003.

The NFL always looking for something to “emphasize” and then it ruins the flow of the game that year.

Did anyone ask for more flags? Because this is how you get more flags. Might as well get rid of defense altogether because we all know every incomplete pass is gonna be followed with this penalty now…

Great. More flags. Can’t wait to see more games not decided by the players themselves.

Penalties that could be called every play give the refs and the league WAY too much power over the game. You want people to believe it isn’t rigged to a point, get rid of these penalties or at least reduce the consequence of them.

Genuine question for anyone seeing this. Is this the worst roughing the passer call in the history of the league?? pic.twitter.com/vPpNT1x6CR

This roughing the passer call on Jevon Holland is easily one of the worst ones I’ve ever seen. pic.twitter.com/159Jr6bQbV

Without hyperbole, this is by FAR the worst 'roughing the passer' penalty I have EVER seen in the NFL.

Yep… that is definitely a problem.