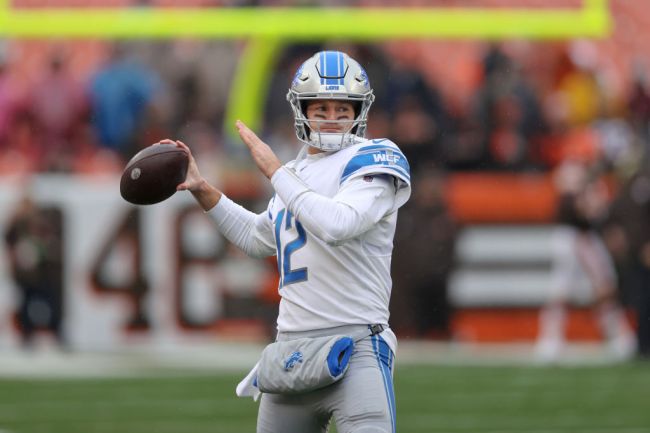 NFL football on Thanksgiving is one of the holiday’s great traditions. Not only has the league been playing Thanksgiving Day games since its inception back in 1920, but the Detroit Lions have been hosting one game since 1934, while the Dallas Cowboys have been hosting since 1966. But that’s sort of the problem with tradition, isn’t it? Just doing things because that’s the way they’ve *always* been done. Because let’s be honest, if football fans had their choice, the Lions would’ve been booted from the Thanksgiving Day slot long ago, as the team is consistently one of the league’s worst.

This year, unsurprisingly, is no different, as the Dan Campbell-coached Lions find themselves at 0-9-1, making them the only winless team in the NFL. And not only that, but they’ll be without their starting quarterback Jared Goff on Thursday, making the prospect of watching the Lions play all the more nightmarish. To make matters worse, their opponent, the similarly pathetic 3-7 Chicago Bears, will also be trotting out their backup quarterback, which means fans will be subjected to a Timothy Boyle vs. Andy Dalton matchup on Thursday.

Still, regardless of how pitiful fans know the game will be, the NFL still has to (somehow) promote the game, which is how graphics like the one below have come into existence. Naturally, NFL fans couldn’t help but crack jokes about the fact that a graphic featuring the faces of Timothy Boyle and Andy Dalton was being used in an effort to entice people to tune in.

I hope they tie

Why does the NFL subject us to this every Thanksgiving?? https://t.co/B1aj0j6VMb

I’d almost rather talk to my family

Nice of the NFL to provide free syrup of ipecac to those unlucky folks poisoned by family cooking mistakes https://t.co/q4nj5V1v72

Whoever made this graphic had to be laughing the whole time https://t.co/mqmbg4mjPh pic.twitter.com/nL4Jnxc34e

Luckily, the games following Bears-Lions are slightly better, as the Las Vegas Raiders will head to Dallas to take on the Cowboys before the New Orleans Saints host the Buffalo Bills in the primetime matchup.