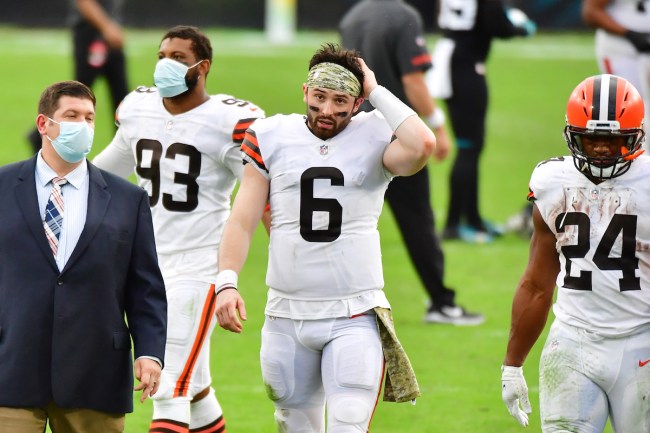 There are a lot of great NFL quarterbacks in the league today, with names like Patrick Mahomes, Aaron Rodgers and Russell Wilson, among others, coming to mind as the best right now. And while those are all guys anybody would undoubtedly want on their favorite team or fantasy squad, even they didn’t accomplish something that two other signal-callers did during the entire month of November: Not throw a single interception.

You may want to sit down and get ready for what you’re about to see, because the only two NFL quarterbacks eligible for such a stat — meaning they started each one of their team’s four games in the month — aren’t who you might imagine. In fact, as mentioned in the headline, I’ll bet you $100 you couldn’t guess the two passers without taking a hint or looking it up.

So who are the two players? How about Deshaun Watson and Baker Mayfield, who combined to throw 11 touchdown passes to zero interceptions through the month of November.

The QBs who started/finished 4 games in the month of November without throwing an interception:
* Deshaun Watson
* Baker Mayfield

Now, as a Browns fan, I’m obviously pumped to see Baker Mayfield’s name on this list ahead of some of the aforementioned NFL quarterbacks with more impressive overall resumes and notoriety. But before my fellow Cleveland fans throw a party and celebrate such a feat, let’s take a deeper dive into the guy’s numbers over those four games.

Look, I love Mayfield protecting the football and not turning it over, but, sheesh, those are pedestrian stats. Averaging just 179 passing yards per game in those four contests is pretty pathetic, but, hey, the Brownies went 3-1 in those games, so being a game manager seems to be working well for Baker.

Deshaun Watson being the other NFL quarterback who didn’t throw a pick in November is a helluva lot more impressive. For comparison’s sake, just take a look at his numbers over the Texans’ four games in the month.

Damn, Watson nearly had as many completions as Mayfield had attempts in the month, along with nearly 400 yards more passing yards. However, Baker’s Browns got the best of Deshaun’s Texans, handing the Houston QB his team’s only loss in the month.

There are a lot of NFL quarterbacks who would take a month of no interceptions, and while Mayfield and Watson are the only two to accomplish the feat, they did so with very different approaches. Each seemed to work, but, man, I would’ve never guessed these were the two starting passers in the league who would’ve ended up making this exclusive list in November.