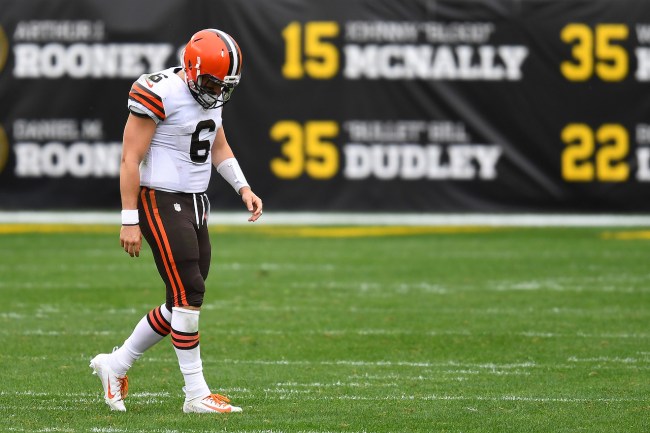 Look, Baker Mayfield and the Cleveland Browns are currently 4-2 and in the thick of the AFC playoff race, so it’s not like I should be complaining about how this season’s gone so far considering they’ve overachieved to this point. In fact, not long ago, I wrote a definitive piece stating why my Brownies are still going to reach the postseason — and I’m not ready to jump ship after one pathetic, miserable, lifeless loss on the road to the Pittsburgh Steelers.

That said, after seeing the Browns look like, well, the Browns throughout that game — penalties mixed with other mistakes mixed with missed tackles and mental errors — something stood out to me that I absolutely hate admitting: It might be time for the front office to start scouting quarterbacks, because Baker Mayfield looks lost.

Again, I’m not completely giving up on Mayfield quite yet (as I almost did last season), but, sheesh, I had a feeling it was going to be a long day after watching that pick-six during the Browns’ opening series. Just look at what I texted my buddies after a sack on Cleveland’s second series. 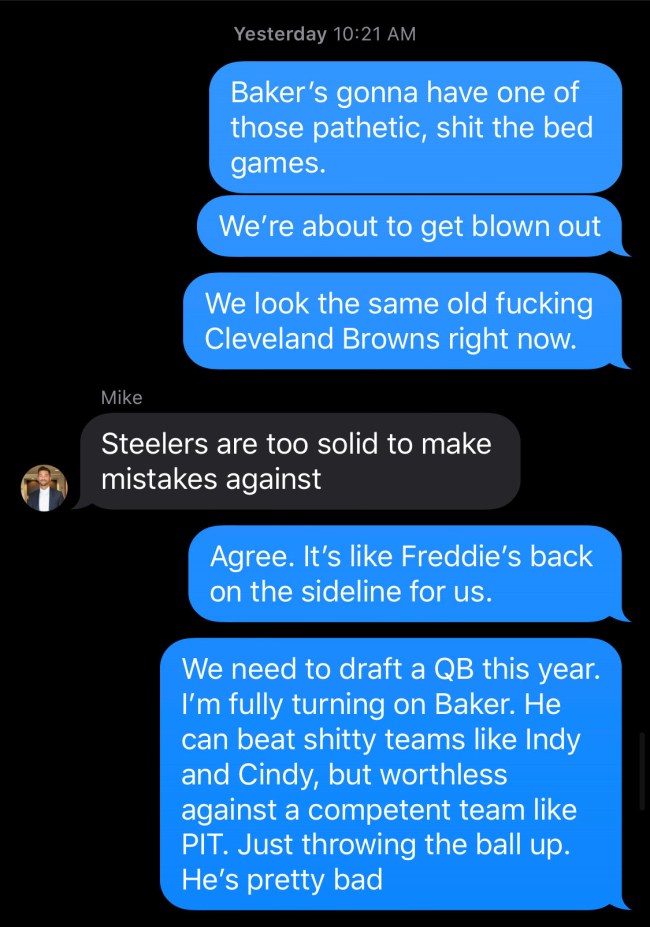 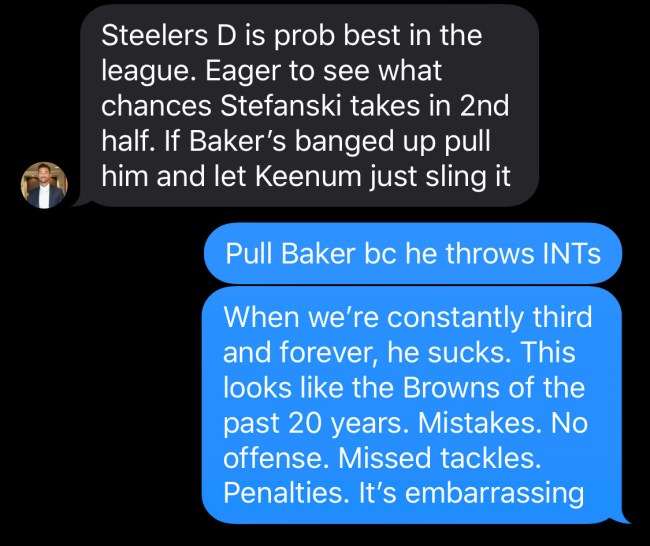 For the past couple years, every Browns fan wants to believe in Baker. We defend him. We make excuses for him. We really want to will him to be the man who turns around the franchise. After managing the offense through the first five games — and leaning on a run-first game plan — Mayfield excelled. But once he was forced to pass? Oh man, did he look like a JV quarterback making his first start against a Varsity squad.

Baker Mayfield is getting worse not better and his inability to operate a standard dropback passing offense is killing the Brownshttps://t.co/EZg1pYiSFr

So is it time for the Browns and the team’s fans to panic? Absolutely. And Pro Football Focus‘ Mike Renner outlined some reasons in a recent article following the embarrassing loss to Pittsburgh.

For the last year and a half, I’ve repeated one question almost instinctively when asked about Cleveland Browns quarterback Baker Mayfield: “Who at the quarterback position peaked in their first year?”

Outside of injury-addled quarterbacks like Robert Griffin III, you’d be hard-pressed to find many more examples. But after a year and a half of not only not progressing but also regressing in key aspects of the position, it’s time to add Mayfield as an answer to that question.

Mayfield’s issues extend far beyond getting the ball from Point A to Point B (and even that hasn’t been a given).

In the words of PFF’s Seth Galina, a former quarterback coach in his own right, “the confident quarterback we saw in 2018 no longer exists.”

So what’s the “fix” for the former No. 1 overall pick? The answer to that would be better answered by Mayfield, Stefanski or a sports psychologist. However, it doesn’t take the latter to realize that the problem with Mayfield’s play over the last year and a half is just as mental as it is physical.

Along with Renner’s words, he gave some cold hard facts (which, if you know me, I love) that showed Baker Mayfield’s regression since his rookie season two years ago. The guy’s holding onto the ball for too long. He’s staring down receivers. He’s just not capable of being that dropback, deliver a strike in the face of pressure quarterback. And that’s hard to accept.

With rookie Joe Burrow and the Cincinnati Bengals up next on the schedule, it’s time for Baker to channel his inner competitive psychopath and prove that he’s better than this year’s No. 1 overall pick. That swagger’s been lacking from Mayfield for the past couple seasons. It’s ridiculous.

Baker Mayfield has the offensive weapons that should keep the Browns in the playoff race till the end. But it’s on him to figure out what the hell is missing when he faces a competent defense like Baltimore or Pittsburgh — because, in those two losses, he threw for a combined 308 yards with two touchdowns and three interceptions, while completing just 54.7 percent of his passes. That’s like rookie season kind of stuff.

It’s been 12 games since Baker has throw for over 300 yards. Until recently, he had a record of throwing an interception in eight-straight games. It’s bad. It’s time to panic bad. And it’s time for Baker Mayfield to wake up and stop putting the Browns in a position to lose — otherwise he may find his time in Cleveland’s over before it really ever got started.