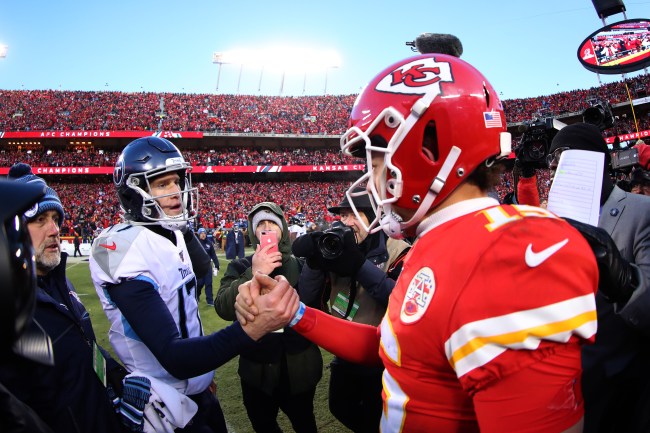 What’s the first thing you think of when you hear the name Ryan Tannehill? Probably something like “game manager” or, worse, “a journeyman quarterback who was a former top-10 pick.” But before you crap all over the Tennessee Titans‘ signal-caller, you might be interested in a little fact check: The dude has outplayed reigning Super Bowl MVP Patrick Mahomes.

That’s right, while every single person in the football world has (rightfully) been gawking over Mahomes and his no-look passes, insane arm strength, high-powered offense and his outrageous $477 million contract, Tannehill has just gone about his business, quietly putting up bigger numbers than the former league MVP. No, that’s not a typo, it’s actual fact — just take a look for yourselves.

How good has Ryan Tannehill been since becoming Titans starter?

Uh, what? How. In. The. Hell. Did. This. Happen? No, really, it’s insanity to think that Ryan Tannehill has all but matched or surpassed the mighty Mahomes in every statistical category since he took over the Titans’ starting quarterback gig for good in the middle of last year. And by leading the Titans to a 4-0 start this NFL season — while tossing 9 touchdowns compared to just 1 interception in four games — Tannehill’s out to prove that he’s more than just a game manager or a busted first round pick.

That’s right, it’s time to put some damn respect on Tannehill’s name, and ignore the fact that he’s got a beastly running back like Derrick Henry to hand the ball to, because the guy is straight slingin’ it. And it goes without saying that the Titans have far fewer weapons at skill positions than the Chiefs. Yet, here we are, salivating at Patrick Mahomes and his offense.

Oh, and if you need another fact check, there’s this: The Titans have averaged 30.5 points per game so far this season, while the Chiefs sit at 29.8 points per game. So, again, the edge goes to Tannehill — something nobody probably thought. I mean, sheesh, this is Patrick Mahomes we’re comparing him to.

I don’t give a damn about defenses stacking boxes against the Titans to slow down Henry. I don’t care if Ryan Tannehill only threw a combined 160 yards in two playoff victories last season. All I care about are the facts, and they say that the Titans quarterback has outplayed Patrick Mahomes.

So I’ll leave you all with this: I’m sorry to all you fantasy football owners who spent a second or third round pick on Mahomes, only to see Tannehill go undrafted and put up better stats. That’s really got to sting, and, in the words of the great Douglas Charles here at BroBible, “TITAN UP!”