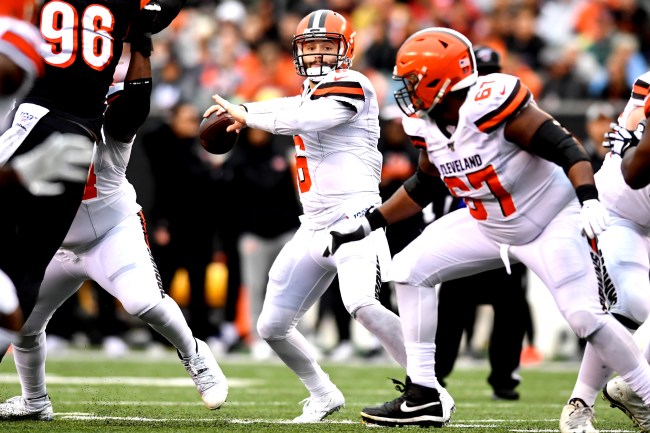 If you have been a Cleveland Browns fan for any length of time then by now you have to pick and choose your spots when it comes to getting excited about your team.

After all, the Browns have had just one winning season in the past 17 years, and just two since the team was reborn following then owner Art Modell moving the entire operation to Baltimore (and winning a Super Bowl just five years later).

So it comes as little surprise that Cleveland Browns fans are very excited to see that their 25-year-old quarterback Baker Mayfield – the man who ended a 635-day winless streak after being the number one overall pick in 2018 – appears to have slimmed down quite a bit this offseason.

Perhaps those really awful-looking pushups Mayfield has been doing actually have been working?

Thanks for stopping by @bakermayfield and @emilywmayfield !! You have the best sports city in the world behind you 🔥🏈 @clevelandbrowns

I’ll admit, I have not been practicing social distancing the best between myself and my fridge.

After a pretty miserable sophmore NFL season in which Mayfield’s TD passes dropped from 27 to 22 while his interceptions rose from 14 to 21, the former Sooner reportedly decided that the extra weight he was carrying in 2019 was not beneficial.

An important focus for the #Browns heading into 2020: QB Baker Mayfield’s fitness and body makeup. From what I understand, he put on some weight last year to bulk up and lost some quickness. His plan is to be slimmer & faster this year, with an emphasis on being in better shape.

That and the fact that in a photo with other NFL players hanging out shirtless on the water made him look like some schlub who just happened to wander into the picture.

Meanwhile, Browns fans, who were ridiculously optimistic heading into the 2019 NFL season only to see the team actually do worse than they did in 2018, are pretty fired up to see their QB has been putting in some work.

Remember how Baker had that sneaky elusiveness to avoid potential sacks in 2018? HE'S BACK! https://t.co/oWNGQCBetH

You're all in big big trouble! https://t.co/NfRPGHy9j2

Baker Mayfield seen that contract that @PatrickMahomes got & Baker at least want's half of that. His prove it yr!!! https://t.co/8LiVRx5VHn

Skinny Baker is back! https://t.co/u6bzgXmsCQ

Cutting out that cheesecake from the diet

Oh yeah… I almost forgot about that.