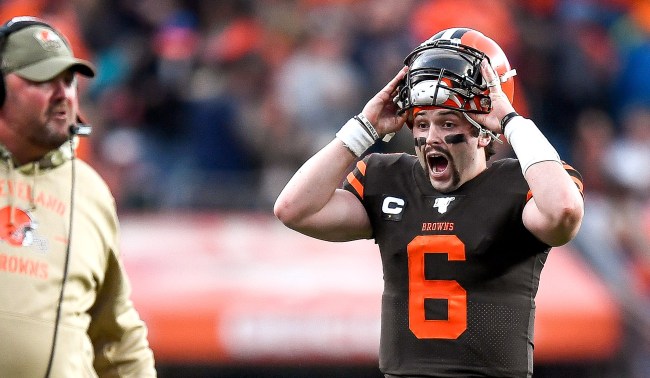 First, it was the photo that made him look like a middle-aged dad hanging out with real athletes and now it’s his push up form that’s getting Baker Mayfield roasted by the entire Internet.

With most of the world practicing social distancing and quarantining in their homes there have been a number of ‘challenges’ going around on social media and one of the most popular has been the ‘push-up challenge.’ It’s a way to keep people somewhat active while they’re cooped up inside.

All you do is take a video of yourself doing a certain number of push-ups then tag a handful of buddies to do the same. Jarvis Landry challenged Mayfield which allowed the entire world to see just how brutal Mayfield is at doing push-ups.

Before we even start to talk about Mayfield’s form in the video, I think it’s worth pointing out the man did end up doing 25 consecutive push ups – or at least something close to a push-up – which is something most people can not do.

I personally think Mayfield’s hair is the biggest L in the entire video and it causes somewhat of an optical illusion. Something about his hair flying around as he’s moving up and down is a major distraction, plus, it’s just another pound or so he has to worry about during the push-ups. He’s really working harder than a lot of people because he’s having to carry all that lettuce atop his dome. If it looks like he’s just throwing his head back and forth during the video, that’s because that’s exactly what he’s doing.

Nevertheless, the Internet loves piling on the man and did not hold back.

Man what are those pic.twitter.com/v98aDdyoUn

This is basically what he's doing 😂😂😂😂 pic.twitter.com/JV72F3ZoUD