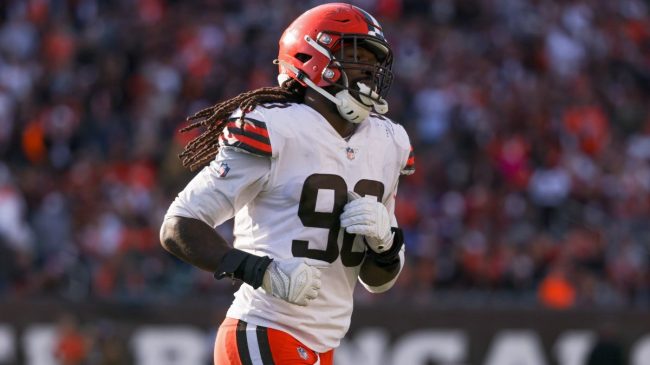 The Cleveland Browns landed a huge piece to the defense on Sunday with the return of defensive end Jadeveon Clowney.

The former No. 1 overall pick played the 2021 season in Cleveland, recording nine sacks opposite of Pro Bowler Myles Garrett. Clowney experienced a huge bounce back campaign after struggling through a few down seasons with the Titans and Seahawks.

The All-Pro defender inked a one-year deal worth $11 million with the team. Now, he’ll look to build upon that production and get the Browns back to the playoffs in 2022.

What’s interesting, however, is a report that the defensive end turned down multiple offers to return to Cleveland. And some of those offers were much higher than what’s being reported for his deal with the Browns.

NFL insider Ian Rapoport states that Clowney turned down deals worth $14 million and $15 million. What’s more notable, though, is the fact that some of those offers were multi-year contracts which would’ve offered the veteran more stability.

Clowney obviously wanted to return to the Browns after his breakthrough season. Fans are now reacting to his spurning other suitors to stay in Cleveland.

Fans react to Jadeveon Clowney’s deal with the Browns

Cleveland fans were obviously ecstatic to hear of Clowney’s return. It now solidifies one of the better defensive fronts in the NFL.

I think Jadeveon Clowney realizes this defense could be extraordinary

Others, though, were skeptical of the report that he turned down better offers to return to Cleveland.

I don’t believe you

Me when I spread misinformation over the internet

We’ll see if the move pays off for Clowney. Should he see another big year, it could lead to higher offers in the future. If not, he might regret not taking the money and stability.