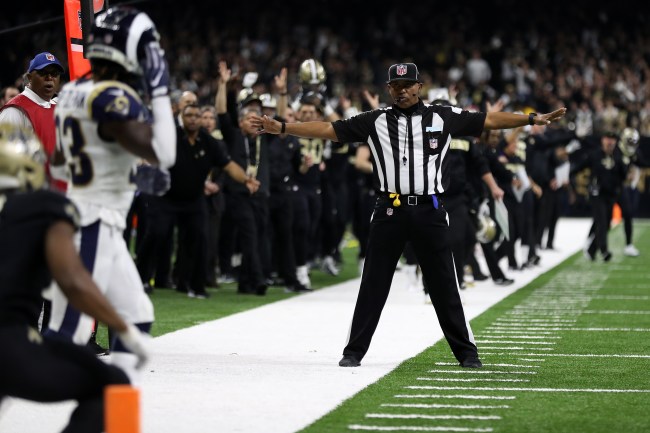 Last week, refs in the Saints-Rams game blew a huge pass interference call late in the fourth quarter that eventually may have cost the New Orleans Saints a chance of playing next week’s Super Bowl.

Saints fans weren’t happy when it was revealed that 4 of the refs who were involved in the game lived in Southern California.

Referee Bill Vinovich, who led the game’s officiating crew, lives in Newport Beach, California. Down judge Patrick Turner, whose primary responsibility was to follow Lewis on the blown call from start to finish, lives in Lakewood, California, in Los Angeles County.

Side judge Gary Cavaletto, whose job was to initially watch outside receiver Dan Arnold before shifting his focus once the ball was thrown to Lewis, lives in Santa Barbara, California. Back judge Todd Prukop, who was stationed in the end zone as an extra set of eyes on the controversial play, lives in Mission Viejo, California.

All kidding aside, why would the NFL let 4 refs from Southern California do a championship game with a team from LA involved….more i hear, the more the saints got shafted. 🤔🤔

According to ESPN’s Adam Schefter there are several people who work in the NFL who are showing “concern” over the league allowing those 4 officials with ties to Southern California to ref the NFC Championship game.

In the latest twist to the simmering controversy from last Sunday’s NFC Championship Game, there is some concern in league circles about the NFL’s judgment in allowing four game officials who live in Southern California to work the game between the Los Angeles Rams and New Orleans Saints, league sources told ESPN.

Those same four officials — all with long ties to Southern California — were the ones most responsible for the non-call on Rams cornerback Nickell Robey-Coleman’s early, helmet-to-helmet hit on Saints wide receiver Tommylee Lewis that was widely viewed as pass interference. The league admitted to the Saints that it “f—ed up the call,” according to sources.

While none of the league officials believes there’s a conspiracy at hand they all do agree that is was a bad look for the NFL to have 4 refs from Southern California work the game.

“The NFL put [itself] in a bad situation,” one officiating source told ESPN. “This is stuff that has to be taken care of prior to game. It’s just guys not thinking of what’s going on, nobody doing their checks and balances. The league is usually pretty much on top of it. This is one that slipped through the cracks.”

“I haven’t heard anybody say the game was fixed; I have heard people say the crew F’ed up,” one high-level league source told ESPN. “But the optic is bad. It’s a legit issue and they should have figured that out.”

It seems like the NFL will likely look at the issue in the offseason.

One person with competition committee ties said the league needs to take steps in the future to ensure that officials do not work games that involve teams in the states in which they are from and that no perception of impropriety is created.

Schefter also goes on to report that there will be no officials with any ties to Southern California or Massachusetts for next weekend’s Super Bowl game.