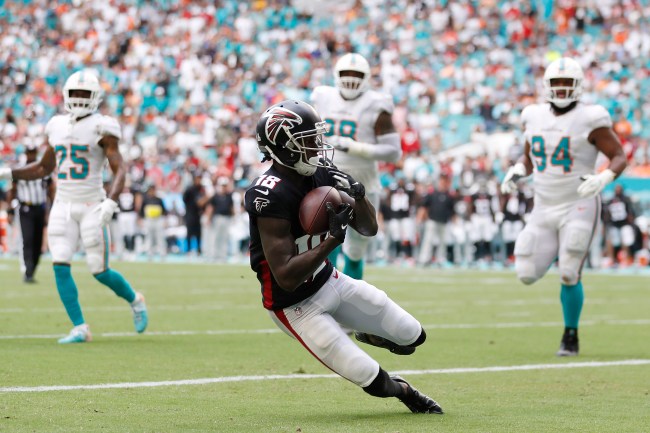 Calvin Ridely enjoyed a prolific start to his NFL career as a member of the Atlanta Falcons, but it seems that his time with the team is quickly winding down. Reports surfaced near the end of the season that he wanted a trade and now it seems like him leaving Atlanta is the most likely outcome.

That has led to plenty of speculation already about potential trade partners and NFL analyst Benjamin Albright sees an option that he believes makes a lot of sense.

Would not be surprised at all to see WR Calvin Ridley dealt to the New England Patriots this off season.

This move would make plenty of sense for the New England Patriots. It has been quite some since the Pats have had a threat of this magnitude on the outside. Their N’Keal Harry pick hasn’t panned out. Jakobi Meyers has broken out over the last couple of years, but seems like more of a secondary option than an alpha.

There’s just one problem. This move doesn’t make sense for Calvin Ridley. If Ridley is ready to leave the only NFL organization he has ever called home, it has to be due at least in part because of concerns about his ability to thrive in the offense. He probably wasn’t encouraged by that garbage Matt Ryan was slinging this year.

However, there is little reason to believe things will be any better for him in New England. Since 2008, the only receivers to top 1000 yards in New England have been slot guys and tight ends. Calvin Ridley isn’t either of those. Over the last two years, Jakobi Meyers has led the team in receiving yards with 729 and 866 yards.

The Pats also run the ball a lot more than the Atlanta Falcons (96 more attempts this year). That type of run-heavy offense is not conducive to putting up Pro Bowl numbers. Mac Jones also remains an unproven asset. He might be able to change the Pats offense as he develops. He might be a game manager.

Calvin Ridley is on the last year of his rookie deal. This man is going to be looking to get paid a year from now. He’ll probably expect to be one of the league’s top paid wideouts on his next deal after showing he belongs in that category last year.

To get that kind of contract, he’s going to need to put up big numbers next year. The New England Patriots just don’t look like an offense that can give Calvin Ridley what he’s looking for.