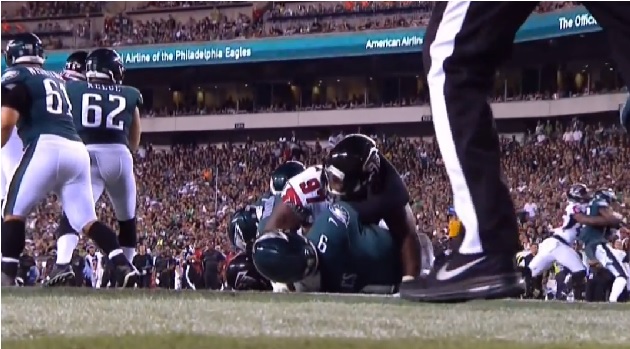 In the offseason the NFL added several new rules to prevent injuries and to make the game safer.

One of the new rules implemented this offseason has been dubbed the “Aaron Rodgers Rule,” because it was put into place to prevent the injury that occurred when Anthony Barr drove into the Packers QB after a tackle last season.

In the second quarter of tonight’s season opener between the Falcons and the Eagles, Falcons defensive tackle Grady Jarrett was flagged for the new roughing the passer rule when he was unable to prevent his body weight from falling on top of Eagles QB Nick Foles.

Trash roughing the passer call – What is he supposed to do there? Freeze in mid-air?

BODY WEIGHT ROUGHING THE PASSER CALL ON GRADY JARRETT IS ONE OF THOSE RULES THAT ONLY SOMEONE WHO NEVER PLAYED COULD MAKE – HOW CAN A 300 POUND MAN CHANGE HIS DIRECTION IN MID STRIDE – CMON MAN?! @SkySportsNFL

If that roughing the passer penalty was legit, let's all go home now. When is ice dancing on?

Okay this roughing the passer shit kinda stupid lol how tf a 310 lb unit gonna stop himself mid fall from hitting the QB. You asking these guys to do the impossible smh

the “body weight” roughing the passer call is garbage

THIS NEW ROUGHING THE PASSER RULE IS FUCKING STUPID. might as well play flag football at this point. How y'all expect these dudes to wrap up and make the tackle and also catch themselves before falling on the QB?

How do you tackle someone without putting your body weight on them? Why don’t they just have qbs wear flags, the defense doesn’t get lame penalties for roughing the passer and the qb’s don’t get concussions.