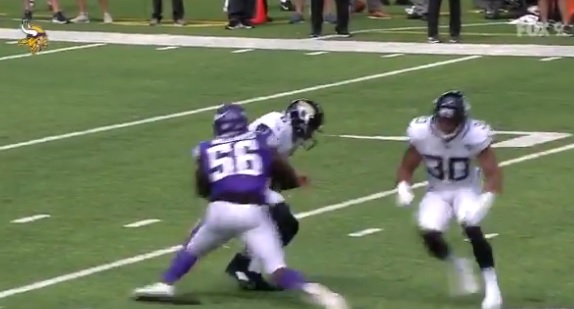 In the offseason the NFL has implemented several new rules to prevent injuries and to make the game safer.

One of the new rules implemented this offseason has been dubbed the “Aaron Rodgers Rule,” because it was put into place to prevent the injury that occurred when Anthony Barr drove into the Packers QB after a tackle last season.

During today’s Vikings-Jags preseason game, Vikings’ Antwione Williams sacked Jaguars backup QB Cody Kessler and was called for “roughing the passer” for a play that would have been pretty routine in the past.

This was a roughing the passer penalty, multiple angles pic.twitter.com/NpwUkcF3cx

Roughing the passer!! Welcome to 2018. pic.twitter.com/oIIrVplQAO

Of course NFL fans were absolutely furious with the new rule.

Pretty much we all might of thought football was almost dead last season well its officially flag football now pic.twitter.com/qJFw5Q4TVA

Vikings fan here, there has been about 5 flags called on the Jags today that have been absolutely blasphemy. Just brutal.

It's official… QBs have skirts on pic.twitter.com/DGagqwPccB

That’s awful. You guys complaining about this helmet rule – this is the true death knell for football right here.

Just call the whole thing off, meaning the 2018 season, if this is roughing the penalty. Protect the QB from cheap shots and the like, absolutely, but the season will quickly devolve into farce if this is consistently called a penalty

Just Unbelievable. Don't know what else to say. NFL football as we know it may be over,

Between this rule and the new lowering the helmet rule, the game of football may have changed overnight.