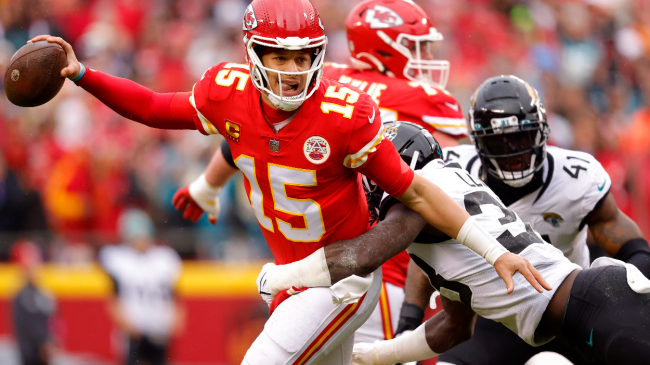 NFL injuries were a theme of the divisional round of the playoffs. We saw setbacks affect star players, most notably Kansas City passer Patrick Mahomes and Dallas rusher Tony Pollard.

In Mahomes’s case, he was able to return, albeit at less than 100%. Pollard wasn’t so lucky after suffering a broken leg.

Those injuries led one NFL analyst to call for a rule change.

Warren Sharp is pleading for the league to eliminate what he categorizes as “hip drop tackles.” He notes that this form of tackling style is the reason for a number of player injuries.

Essentially, this technique involves a defensive player wrapping around the back of a ball carrier then dropping their full weight on the lower half of said player. That weight forces the offensive player to fall backwards while having their legs caught underneath the defender.

Sharp gives a breakdown of examples in a video posted to social media.

this may not be popular

this offseason, the NFL may want to discuss hip drop tackles pic.twitter.com/Bq5q34lOAq

“This may not be popular,” Sharp says. “But after seeing multiple key players injured this weekend using the technique… and researching how other pro leagues saw an increased usage and eliminated it from their game via penalty… this offseason, the NFL may want to discuss hip drop tackles.”

He notes that the National Rugby League has made a change after seeing similar injuries, and that the NFL should follow suit. It may not be that easy, though.

You’ll see a lot more one-on-one situations in football compared to rugby, with many of those scenarios involving a defender chasing a ball carrier down from behind. As if it isn’t already hard enough to play defense with targeting and roughing the passer flags being thrown like candy, eliminating yet another takedown method would make it even more difficult.

Many on social media were quick to react to Sharp’s suggestion.

Some agreed, with one person commenting, “Yep, this was the same thing that happened to Deebo Samuel.”

Others, however, don’t believe a change can be made. This fan wrote, “I get it, but eventually it’s going to become so ridiculously hard to play defense if we keep adding these rules.”

Many shared that viewpoint, with one fan saying, “I have sympathy for the injured players, but it’s already impossible as a defender. At this point just make it flag or two hand touch. Injuries have and always will be part of the game.”

Injuries are something the NFL will surely look at moving forward as they always want to take player safety into consideration. This ruling, however, may not be a top priority.