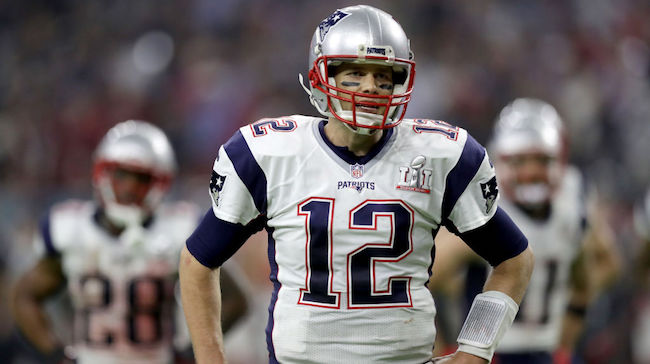 Last year, the New England Patriots did therapists in the city of Atlanta a serious favor when they mounted the most improbable comeback in Super Bowl history after erasing a 28-3 deficit against the Falcons to bring the Lombardi Trophy back to Foxborough for the fifth time. However, the real drama came after the game when someone stole Tom Brady’s jersey— which was valued at $500,000— out of the Pats locker room and launched one of the most surreal manhunts in recent memory.

At first, Patriots equipment managers were optimistic that the jersey had gotten lost in the shuffle, but the search continued after they were unable to locate it when they unpacked the team’s gear after getting back to Gilette Stadium. Brady channeled his inner Charlie Kelly when he posted a picture of a board filled with possible suspects, but the search intensified after the NFL discovered a video of a member of the Mexican media snatching the piece of memorabilia.

The QB’s jersey was eventually returned to the Patriots by the FBI and it appears the NFL is taking some major steps to ensure no similar incident occurs at Super Bowl LII in Minneapolis. TMZ reports the league will be contracting federal agents, private security guards and members of local and state law enforcement to prevent another incident (there will also be an increased number of surveillance cameras canvasing the stadium).

My only hope is that the Patriots are able to leave Minnesota without having to deal with yet another scandal ending in “-gate.”