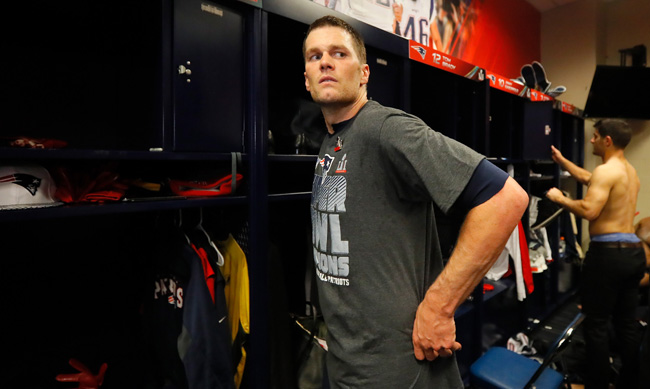 Earlier today we reported that our national nightmare involving Tom Brady’s stolen Super Bowl jersey had been resolved because an equipment manager reportedly had stowed it away for safe-keeping.

Then, shortly thereafter I had to add an update because Brady said this morning that he still has no idea where it is. The person who had originally reported that story, WFXT sports director Tom Leyden, attributed that report to a a miscommunication with Patriots employees.

Now, this story just got even more stupid slash bizarre as the Lieutenant Governor of Texas Dan Patrick (no, not the talk show host) is calling in the Texas Rangers to help find Brady’s missing jersey. As in the law-enforcement people, not the baseball players.

No, I am not kidding.

His statement via ABC 13…

“In Texas we place a very high value on hospitality and football. Tom Brady’s jersey has great historical value and is already being called ‘the most valuable NFL collectable ever.’ It will likely go into the Hall of Fame one day. It is important that history does not record that it was stolen in Texas. I’ve called Colonel Steve McCraw to ask that the Texas Rangers work with the Houston Police Department on this case.”

“I’m a Texans and Cowboys fan first, but the unquestionable success of the Super Bowl in Houston last night was a big win for our entire state and I don’t want anything to mar that victory. Whoever took this jersey should turn it in. The Texas Rangers are on the trail.”

Well, that does it. Whoever swiped Touchdown Tommy’s jersey, which some have speculated could be worth $500,000, is in for one hell of a rough ride now…

Stay tuned for more updates in this fascinating story.