Our National Nightmare Is Over: Tom Brady’s ‘Stolen’ Super Bowl Game Jersey Has Been Found [UPDATED] 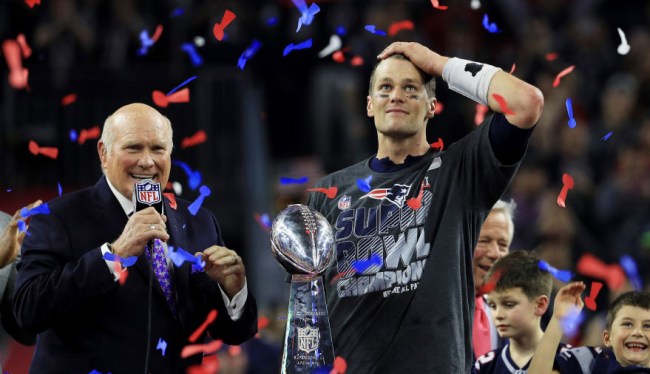 After Super Bowl LI had concluded Tom Brady was on a frantic search for his game jersey in the locker room because he thought someone stole it.

Brady looked flustered as he searched his locker area at NRG Stadium but was unable to locate the game-worn jersey that he donned in leading the Patriots to a 34-28 overtime victory.

“It was right here. I know exactly where I put it,” Brady said as he called the security staff and team equipment managers to assist in the search.

Backup quarterback Jimmy Garoppolo told other players to look for the jersey, but the longer he searched, the more Brady seemed to grow concerned it had been stolen.

While walking out of the stadium, Brady was asked by USA TODAY Sports if he had managed to locate the jersey during his extensive search.

Even while walking out of the stadium Brady still hadn’t located his jersey, telling USA Today when asked if he’d found it, “No. It is going to be on eBay soon, I guess.”

Brady also mentioned during an interview with WEEI that his jersey was also stolen after the Super Bowl two years ago.

Well, fret not Pats fans, the historic jersey has been located.

According to NESN, Tom Leyden of FOX25 discovered that the jersey had been snagged by a Patriots equipment manager who put it away in a safe place.

UPDATE: According to NESN…

Despite an early morning report from FOX25 that a Patriots equipment manager secured Tom Brady’s Super Bowl-worn jersey, the New England Patriots quarterback said at a press conference Monday that he believes his jersey is still missing.

Brady says he hasn't recouped his jersey from last night yet.

Sigh… maybe he just hadn’t heard about the equipment manager. Brady’s not exactly caught up on his world news these days.

UPDATE #2!!! Now the Texas Rangers are getting involved. As in the law enforcement types, not the baseball players.

Tom Brady's #SuperBowl jersey
got stolen and 9 times out of 10 one of the guys that's helping him look has it pic.twitter.com/sJiMxxnDTQ

I have this game used Tom Brady Super Bowl LI jersey for sale. Can't tell how I got it so dont ask. $4,600 or best offer. Need it gone ASAP pic.twitter.com/uVIITkQTiS

Is it wrong that I'm hoping someone is out there wiping their ass w Tom Brady's Super Bowl jersey?

Tom Brady's jersey was stolen after the game. I assume by the angry deflategate equipment manager

Tom Brady's jersey is getting pregnant right now in some Irish bar in the Boston South End #SB51.

Has anyone asked Putin where Tom Brady's jersey *might* be? @NFL @DanHanzus

@NFL @DanHanzus It was Big Ben. Saw him sneak in from behind and snatch it.

People are so savage.