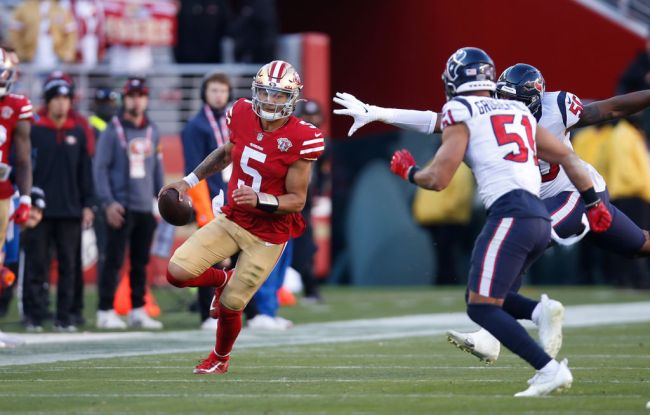 It’s beginning to seem like all of the concern about Trey Lance taking over as the starting quarterback of the San Francisco 49ers may have been unnecessary.

Early on in the offseason there were reports that Lance may not be ready to be the team’s starting quarterback. Recently, the reports on him have been loaded with positives.

"From what I've been told Trey Lance has grown leaps & bounds the past few months as far as playbook & voice in the locker room" ~@PSchrags#PMSLive #FTTB pic.twitter.com/yEeMQakXfY

“Trey Lance grew leaps and bounds the past few months, from what I’m told, as far as playbook and voice in the locker room.”

According to Schraeger, those improvements have included his role as a leader for the 49ers.

Lance truly growing into his role as the 49ers’ is great news for the team as they attempt to maintain the high level of play that got them to the NFC Championship game last season. If the potential that convinced the 49ers to draft him at pick 3 last season is beginning to show, he could make their offense much more interesting than it ever was with Jimmy G.