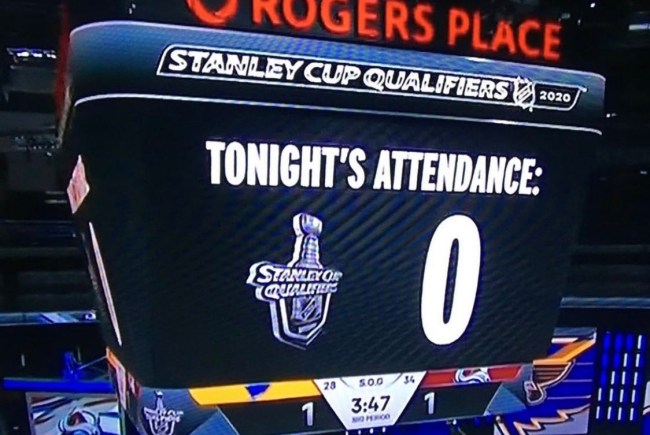 As far as I’m concerned, there isn’t a single postseason in sports that radiates an aura of sheer insanity that comes close to matching the one emitted by the Stanley Cup Playoffs. Whenever the NHL’s postseason rolls around, there’s an unspoken agreement that the officials will swallow their whistles so we can be treated to some good, old-fashioned hockey played at an almost unparalleled level of intensity and there’s really nothing else like it.

You can’t talk about playoff hockey without discussing the fan factor and there’s nothing like hearing an arena erupt like the crowd did during one of my favorite moments in recent Stanley Cup Playoff history. The seventh game of last year’s first-round matchup between the Sharks and the Golden Knights had already cemented itself as an all-time classic after San Jose netted four goals over the course of a five-minute major penalty to take the lead after trailing 3-0 with less than 11 minutes to go and the pot was only sweetened when Las Vegas forced an overtime period that ended with Barclay Goodrow netting the goal that clinched the series for the Sharks.

I seriously thought the roof was going to fly off of the SAP Center in San Jose. That place went absolutely NUTS and the combination of the goal horn, the flashing lights, and that deafening roar perfectly captured what makes playoff hockey as magical as it is.

I have no complaints about the NHL’s decision to finish this year’s season inside the bubbles it constructed in Edmonton in Toronto but I’ll admit I was initially worried that the playoffs just wouldn’t feel the same in the absence of fans. However, between the play-in round and the postseason games we’ve been treated to so far, the action is as thrilling as ever and the league has done a phenomenal job creating an environment capable of producing a game experience that almost makes you forget about just how bizarre the entire scenario is.

During his time as the commissioner of the NHL, Gary Bettman has repeatedly gone out of his way to suck enjoyment out of hockey thanks to the multiple lockouts that have occurred with him at the helm and the inexplicable television deals he’s helped orchestrate that have limited the sports ability to attract a wider audience.

However, I couldn’t help but notice something seemed a little off when the season got back underway and I eventually realized that I was thrown off by the unexpected amount of self-awareness and genuinely fantastic sense of humor that’s been on display at games inside the bubbles. Now, I don’t want to give Bettman credit for having a hand in this but there are even rumors he’s fine with being showered with prerecorded boos when he presents the Stanley Cup, as if 2020 wasn’t already crazy enough.

The NHL put a great deal of thought into the production of the rebooted season, as every goal is accompanied by the horn and song that traditionally blare through the speakers when a team scores on their home rink and Rogers Place and Scotiabank Arena have both been outfitted with giant screens that are home to various graphics over the course of a game.

During Tuesday’s five-overtime marathon between the Lightning and the Blue Jackets, the crew in Edmonton put those screens to good use by showcasing some of the lighthearted jokes that have peppered the broadcasts since play resumed. Sure, this might just be Dad Humor at its finest but it really, really does it for me.

As I said, that’s not the only time the NHL has embraced the absurdity of the situation.

NHL going all-out with the hat trick celebrations in the bubble. pic.twitter.com/IkcVnS8ow0

A HUGE SHOUTOUT to all the fans for their support during the NHL Return to Play. 😂😂#StanleyCup pic.twitter.com/knyAFkX4JT

Whoever is running the jumbotron at these NHL games, I appreciate your sense of humor. pic.twitter.com/N2l1zDRo8r

Props to the NHL for making the most out of an overall very tough situation. I hope everyone responsible for these shenanigans gets the raise they deserve.