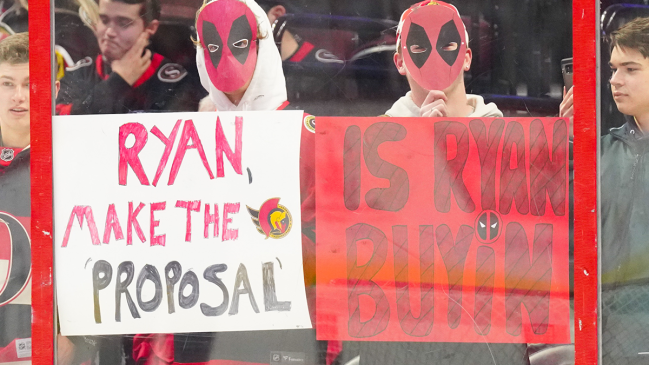 It’s been close to two years since Ryan Reynolds and Rob McElhenney officially became the proud new owners of Wrexham AFC after teaming up to purchase the Welsh soccer club for a cool $2.5 million. While that move was a fairly bold gamble for two actors who had no previous experience running a professional sports franchise, it’s apparently pay off based on the masterclass in corporate synergy they’ve conducted since taking over.

It seems like Reynolds has caught the Sports Ownership Bug in the wake of that acquisition, as a report surfaced at the start of November that claimed the beloved Canadian had set his sights on the Ottawa Senators. It didn’t take long for the Deadpool star to confirm that was the case, although he admitted he’d need some help from a “sugar mommy or a sugar daddy” with some deep pockets to make that dream a reality.

Senators fans appear to be very on board with welcoming Reynolds into the fold based on how he was received when he attended a game at Canadian Tire Centre shortly after he publicly acknowledged he was interested in purchasing a stake in the franchise.

It’s been a little over a month since the team officially hit the market following the death of owner Eugene Melnyk. While there hadn’t really been any major updates concerning the sale since then, that changed on Thursday night thanks to an incredibly intriguing development that surfaced on the TSN broadcast while Ottawa was facing off against the Stars in Dallas.

According to The Ottawa Sun‘s Bruce Garrioch, the NHL is apparently intent on making Reynolds and the Senators a package deal, as the league has reportedly told all interested buyers it wants the actor to be involved with any ownership group that ultimately buys the franchise (which is expected to trade hands for upwards of $775 million).

The NHL has told every group who is involved in the possible purchase of the Sens that they need to involve Ryan Reynolds. Per Bruce Garrioch on Question period.

The NHL can only do so much to force potential buyers to include Reynolds, but commissioner Gary Bettman does have a fair amount of leverage thanks to his ability to block the sale of the team if he’s not satisfied with the terms of the transaction.

With that said, having Reynolds involved in an official capacity seems like a no-brainer for everyone. The Senators would undoubtedly benefit from having him as the face of the franchise, and the NHL would also have plenty to gain with the addition of a high-profile hockey ambassador with a masterful marketing track record.