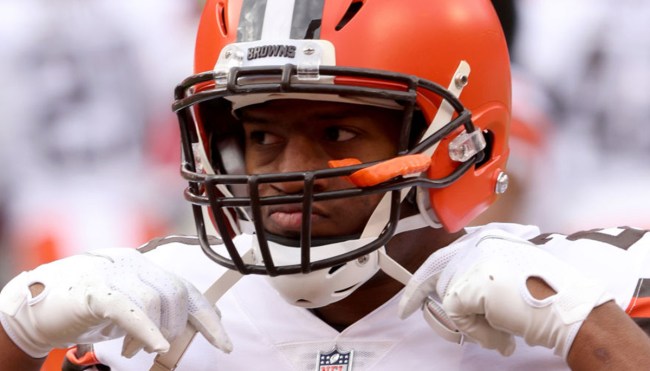 Monday night’s contest between the Browns and the Steelers capped off the penultimate week of the NFL regular season, but it was a particularly significant moment for anyone who’s had to spend the last few months pretending that they care about the performance of other people’s fantasy football teams.

Of course, plenty of people who have an emotional and/or financial stake in that particular pastime were fairly invested in the showdown, as the second-to-last week of the season is when virtually every fantasy football league in existence plays its championship game.

That included anyone who was hoping Browns running back Nick Chubb would put up enough fantasy points to help them secure the crown. Prior to the game, Chubb could be counted on to put up around 14 PPG, so it’s safe to say plenty of owners were less than thrilled with a reduced workload that led to him posting less than half of his average by the time the contest came to an end.

After the game, Browns head coach Kevin Stefanski claimed he decided to let Chubb get some rest after he suffered a minor rib injury in the first half, which was an interesting development when you consider he’d told ESPN his running back was fine on his way to the locker room at halftime.

As a result, plenty of people floated a conspiracy theory to explain Chubb’s underwhelming performance while others simply complained and joked about it costing players a fantasy title.

Is Stefanski playing against Chubb in fantasy title game?

Either Chubb is injured, they're shelving him until next season or Stefanski is facing him in his fantasy football championship.

It seems like Kevin Stefanski should have to tell people ahead of time that he’s playing against Nick Chubb in his fantasy football championship.

When Nick Chubb only has 4 carries. pic.twitter.com/F9FBUiLYc3

I needed 7 points from Nick Chubb to win my fantasy title. He has 6. pic.twitter.com/as9BSwinAd

When you need Nick Chubb for the fantasy championship and see D'Ernest Johnson getting carries pic.twitter.com/Rb5k3wuQ69

The development was even worse for anyone who saw their chance of winning a championship slip away after Najee Harris put the game away with a touchdown late in the fourth quarter.