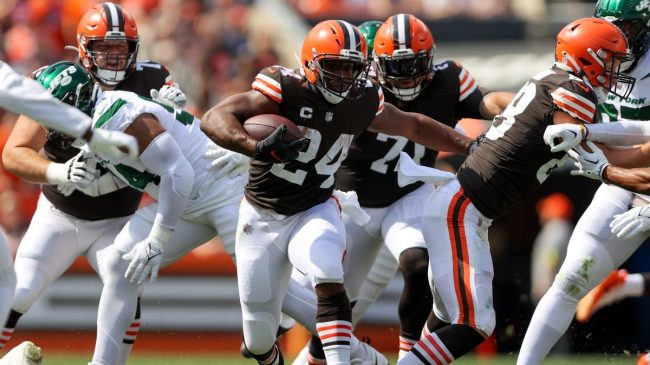 The Cleveland Browns proved once and for all that they and FirstEnergy Stadium are, in fact, a Factory of Sadness.

Cleveland managed to snatch defeat from the jaws of victory in incredible fashion on Sunday against the New York Jets. The Browns led New York 30-17 with under two minutes to play. Then kicker Cade York missed an extra point. Backup QB Joe Flacco followed by leading the Jets on a two-play, 75-yard touchdown drive to cut the score to 30-24 with 1:22 remaining.

New York then recovered an outside kick and marched 53 yards in under a minute, capped by a 15-yard touchdown catch by Garrett Wilson to give the Jets an improbable victory.

Now Browns star running back Nick Chubb is taking responsibility for the loss.

Chubb has made Pro Bowl each of the last three seasons and is the face of the Browns franchise alongside Myles Garrett. If anyone is to blame for the team’s issues, it’s probably not him

But in this instance, he may have made a major error.

Chubb took a handoff with just over two minutes remaining and carried the ball for a 12-yard touchdown that made the score 30-17. New York, however, was out of timeouts at the time and had he gone down or even ran out of bounds, Cleveland could’ve taken a knee and ended the game.

Instead, York missed the ensuing extra point and the rest, as they say, is history. Chubb owned up to the mistake on Tuesday when speaking with the media.

“Yeah, I probably shouldn’t have scored right there,” Chubb said Tuesday. “Honestly, looking back at it, it cost us the game. A lot of things went wrong, not just one thing. But collectively as a unit, as a team, we could’ve all done things different. But it’s only a problem because we didn’t win. So I probably should’ve went down.”

But even he couldn’t have imagined the chain of events his touchdown would set off. Especially not its effects on Cleveland team owner Jimmy Haslam.

Following the embarrassing loss, Cleveland Browns owner Jimmy Haslam was reportedly hit by a water bottle thrown by a fan.

ESPN’s Jake Trotter reported Tuesday that said fan has since been arrested.

Jeffrey Miller, 51, was arrested Sunday on complaints of assault, failure to comply with a lawful order and disorderly conduct, according to the police report.

The Browns are planning to ban Miller from returning to FirstEnergy Stadium, a source told ESPN. NFL Network, which first reported that the fan would be banned, captured video of Haslam walking to the Browns’ tunnel just as Jets receiver Garrett Wilson scored the winning touchdown in a 31-30 win over Cleveland. After the bottle hit Haslam, he looked up to try to find the fan who threw it.

Trotter reports that police used stadium surveillance video to identify the fan and stop him before he could leave the stadium. Miller was then detained after ignoring police orders and eventually taken to the county jail.

All of which could’ve been avoided if Nick Chubb would’ve just gone down.