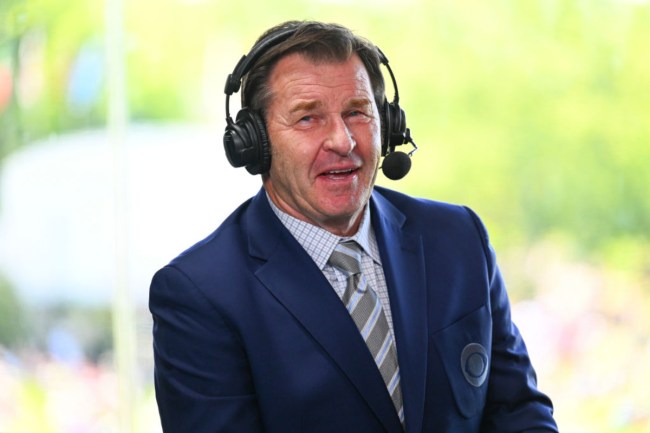 Nick Faldo is calling it quits after 16 years in the booth with CBS Sports and the Golf Channel. He announced the news with a lengthy statement on social media early Tuesday morning.

Faldo shared that his last day in the CBS broadcast booth will be on August 7 at The Wyndham Championship.

Trevor Immelman, the 2008 Masters champion, will step in to replace Faldo according to Sports Business Journal.

In his letter posted to social media, Faldo explained that the decision caught CBS a bit off guard. Faldo explained that he previously told CBS Sports Chair Sean McManus about his plan to step down back in February. McManus was expecting Faldo to remain with the network, but delivered the news that he actually wanted to step away.

Faldo made not-so-great headlines during this year’s Masters when he spoiled Rory McIlroy’s hole-out from the bunker on the 72nd hole of the tournament.

Faldo and his wife live in Montana on the Faldo Farm.

“Once complete and the dust has settled, our wish and hope is that life on the Faldo Farm includes a future filled with visits from my children, grandchildren, Lindsay’s family and all our friends,” Faldo wrote. “As for me, I hope to often be found out back on the East Gallatin River, with a rod, waiters, and the local trout.”

Faldo will be on the call for this week’s Travelers Championship.

Nick Faldo to leave broadcasting and announces his presence in, predictably these days, a whiskey brand. https://t.co/tt7MNB23ZX

Ken Venturi. Johnny Miller. Nick Faldo. Few, if any, did it better. https://t.co/Axu2HZLppT

Nick Faldo is retiring from CBS 🙌🏻

Golf fans everywhere needed a win and I’m not sure it gets any bigger than this ha.

Where’s the party at @NoLayingUp?

Did not expect to wake up to this sad news this morning. Nick Faldo will retire at CBS.

Have enjoyed him and Jim Nantz on the 18th tower for years. A great duo.

Thank you, Sir Nick. Enjoy that Montana home of yours. https://t.co/wn2Yq9CDz2