Nick Foles Or Carson Wentz: Who Should Be The Philadelphia Eagles QB Next Season? 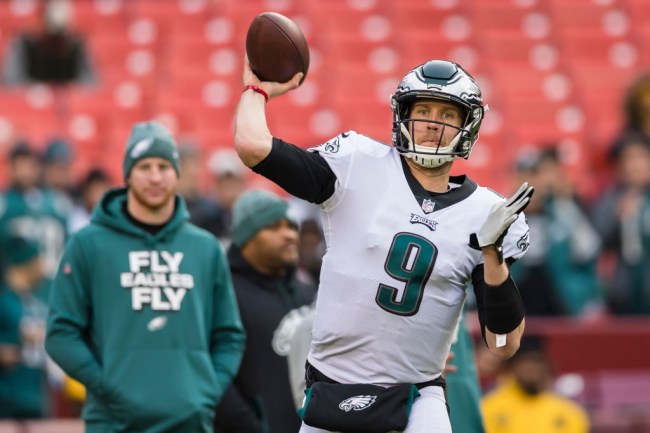 Over the past year, a debate has been brewing as to who is the better Philadelphia Eagles quarterback, Nick Foles or Carson Wentz? Carson Wentz is obviously a bright young star with loads of talent and tons of upside. While Nick Foles is more of a system quarterback, but a damn fine one at that. You don’t just take the Eagles on an improbable run and win the organization its first ever Lombardi Trophy if you’re only good enough to be a backup in the NFL.

This argument is as timely as ever now that Foles is back at the helm as the Philadelphia Eagles try to make another playoff push this Sunday against the Chicago Bears and their swarming defense lead by Khalil Mack. Following this season, Nick Foles becomes a free agent and it would be very hard to believe that the Eagles could afford paying two high quality quarterbacks. That means it’s decision time in Philadelphia. Let’s take a deeper look.

2018 Season
To start the 2018 season, Nick Foles was the starting QB for the Philadelphia Eagles since Carson Wentz was still recovering from the same torn ACL that sidelined him in 2017.  As the starter, Foles went 1-1 to begin the season, however, he did not play like the Nick Foles that finished the 2017 season. The Eagles opened up the 2018 NFL season with a win at home against the Atlanta Falcons thanks to their defense. Foles really struggled in that game posting a Passer Rating of 50.7 against a Falcons team that had one of the worst passing defenses in the league this year. However, his stats bounced back in a Week 2 loss to the Buccaneers, where he posted a Passer Rating of 98.8 and threw for 334 yards.

After Week 2, the Eagles decided that it was the right time to bring back Carson Wentz, who, the year before, was the frontrunner for the MVP before going down with an ACL injury. Wentz played a total of 11 games this year and in those games the Eagles finished with a 5-6 record largely due to an Eagles secondary that was decimated with injuries. Wentz had a very solid 2018 campaign if you look at the stats. He completed 69.6% of his passes this year and threw for 21 touchdowns and just 7 interceptions. His QBR was above his career average at 64.9, however, the Eagles struggled to win games with Wentz as their QB this season.

In Week 14, Nick Foles replaced Carson Wentz as the Eagles starting quarterback after Wentz started suffering with back issues. With a chance to make the playoffs in jeopardy, Foles had to win the remaining three games on their schedule, two of which were against playoff teams, to have any shot at the playoffs.

As we all know, Foles put on his cape again and led the Eagles to a three game win streak to close out the regular season. And, thanks to a Minnesota Vikings loss in week 16, the Eagles clinched the last spot in the NFC. Foles stats for the 2018 regular season included a 4-1 record and a 69.5 QBR. He completed 72.3% of his passes for 7 touchdowns and 4 interceptions. Big Dick Nick did it again for the Eagles.

Career Stats With The Eagles

This chart shows you just how close these two quarterbacks have been throughout their respective careers with the Eagles. However, these stats also show you that throughout Nick Foles’ career with the Eagles he has been the more successful quarterback of the two. A lot of people forget about the year Nick Foles had in 2013 when Chip Kelly was the coach and he threw for 27 touchdowns and just 2 interceptions. People thought that season was just a fluke for Foles and it was all about Chip Kelly’s system. However, over the course of the past two seasons Foles has proven to everyone that he is a Super Bowl caliber quarterback who is at his best in the big moments.

When Carson went down last year, no one gave Foles and the Eagles any shot. Everyone was saying their season was over. However, Foles did something that no other Eagles QB has ever done and that is win the Super Bowl. As for Carson Wentz, there is no doubt that had an amazing start to his Eagle career and the sky really could be the limit for him. He is believed to be by many one of the best young quarterbacks in the game. The only questions is: can he stay healthy?

The Future
I think as of right now, Nick Foles has to be your guy in 2019 for the Philadelphia Eagles. The stats never lie and the stats show that Nick Foles has been the better quarterback for the Philadelphia Eagles throughout his career. Although the stats between Wentz and Foles are very close, the ultimate reason why I would pick Foles over Wentz is that Wentz has struggled to stay healthy throughout the beginning of his career. Not to mention that the two injuries Wentz has suffered were not little injuries. Anytime you tear your ACL and have reoccurring back issues that is not a recipe for success as a quarterback. Football is all about the system and it seems like Nick Foles is very comfortable in Doug Pederson’s system. It is also clear that the rest of the team really rallies behind Foles anytime he is under center.

The biggest difference that I see with Nick Foles and Carson Wentz out on the field is that Nick Foles gets rid of the ball quicker. This allows his skill players to be able to operate with more open space. The other thing you have to take in consideration before choosing your future quarterback is playoff experience. Carson Wentz has zero playoff experience. Nick Foles is 3-1 in the playoffs to go with a Super Bowl. Not to mention that the last three games of this year’s regular season were basically playoff games as the Eagles had to win out to have a chance to get into the postseason.

Lastly, if the team moves on from Carson Wentz and decides to trade him, the Eagles could get a lot in return to fill voids they have on both sides of the ball. But if you let Foles hit free agency… you get nothing.