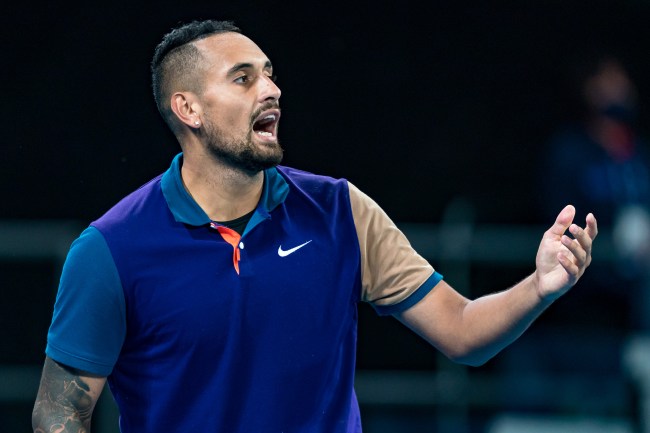 I am but a fly, and Nick Kyrgios outburst content is my light.

While what I can present today isn’t the looming on-court homicide, it is a nice peak into the impulsive tendencies of a self-proclaimed “nutcase” and a man whose lost more money in fines than Telefónica.

The 25-year-old Aussie enjoyed a straight sets win in the first round at the Australian Open Monday night against Portugal’s Frederico Ferreira Silva, an impressive comeback performance that was fueled by some angry self-talk and a verbal accosting of someone who loves him.

This came after botching a point:

Someone is in Kyrgios' box that shouldn't be. #AusOpenpic.twitter.com/icD4iXZtNh

“Tell your girlfriend to get out of my box.”

It’s unclear who in the box he was talking to, but a reasonable person would conclude it may have been his brother Christos partner Alicia Gowans, who was sitting in box, which sounds way dirtier than in should.

When asked by reporters about the spaz in the post-game presser, Kyrgios told us what we already knew.

“Mate, I’m a nutcase when I’m on court,” Kyrgios said. “It was just heat of the battle type stuff. It was just being out there, all those emotions again, you outlet into people you know have your back and you know that’s not going to change.

“A lot of people can relate to outbursting, you know, you just need to verbalize it and lash out on someone sometimes and then I calm down and start playing some decent tennis.”

I felt this comment in my soul. Sometimes when I’m feeling unhinged by a work email I’ll go in my garage and yell into a folded towel as long as I can and I’ve never told anyone that. It’s time to de-stigmatize imperfection.

Kyrgios also had some comments about Novak Djokovic, who said he didn’t have respect for him off off the court.

Good morning to absolutely no-one but @NickKyrgios. His reaction at the end 😂😂😂 pic.twitter.com/60okMRNfs8

‘He’s a very strange cat, Novak is. Heck of a tennis player but unfortunately someone that’s partying with his shirt off during a global pandemic, I don’t know if I can take any slack from that man. Like, that’s as bad as it gets for me.’

Is that as bad as it gets though? Your brother’s girlfriend is crying into a folded towel in my garage right now.