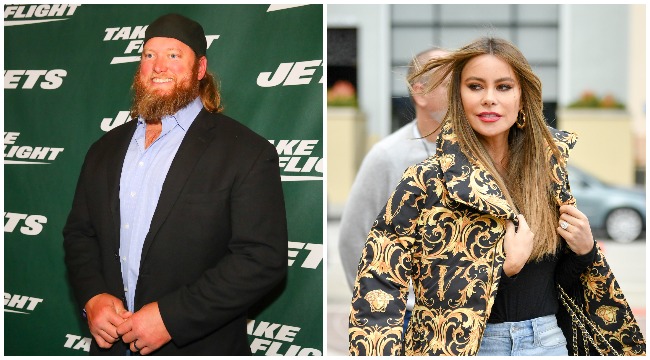 For 13 years, Jets legendary center Nick Mangold has been happily married to his high school sweetheart, Jennifer. The two have a handful of children, several million dollars, and by all standards, seem to be living the American dream in their New Jersey mansion.

Sofia Vergara has no place in a happy marriage. Even a God-fearing man can be moved to risk it all at the mere sight of her.

Thankfully for Mr. Mangold, he was never faced with that impossible dilemma, despite flying to Vegas under the impression he would be.

Mangold, who is now a BBQ aficionado who owns Seventy Four BBQ Sauce, appeared on our Endless Hustle Podcast to discuss a very fortunate missed encounter with the Modern Family goddess.

What do @NickMangold, @SofiaVergara, and @KateUpton have in common? Hear Mangold's hilarious photoshoot story below 📸

“I was doing a photoshoot for Pepsi. It was for Breast Cancer Awareness month. Pepsi was doing a big blast, and they were flying guys out to Vegas to do this. One player from every team. It was a big thing.

The idea was it was with Sofia Vergara from Modern Family.

So I’m flying out to Vegas, it’s me and my wife and I’m like, ‘Holy crap, I’m going to meet Sofia! This is pretty cool, and I was all gung ho.

We get out there, I get dressed, I got all the pink gear and everything, and they’re like, ‘Alright, you ready to take pictures?’

The photo in question:

“So after being burned by this photoshoot, I get a call for another for the Super Bowl with Kate Upton.

So I went to the stadium, got dressed, and they were like, ‘They’re out on the field taking pictures. We’re probably going to take yours in the tunnel, but you can go out there. Because I think D’Brickashaw was doing it then, so I went to see him. And there’s Kate Upton standing there. I was like, ‘Oh, she’s actually here! This is amazing.’

And then I found out it was for GQ and I was like, ‘Wow, I’m just a male model now. Everyone thought Sanchez was the male model, but I think I won in that category.’

Moral of the story: All’s well that ends well.

#tbt to when I was a model in @voguemagazine with @kateupton 🤣🤣🤣🤣

Never give up, kiddos.

Listen to the whole Nick Mangold interview below on the Endless Hustle podcast.

The Competition Hangover of retirement (11:38)

The toolset required to be an elite lineman in the NFL (16:00)