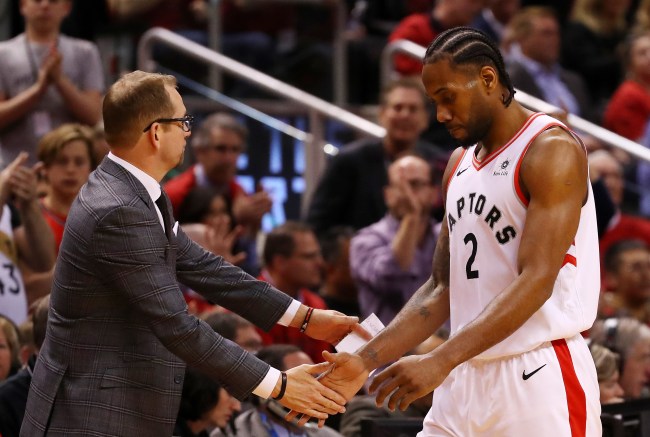 Despite Nick Nurse looking like a substitute teacher that actually tries to teach a lesson, he emanates a Bill Walton-esque chill that is rare in the ‘win now or die’ occupation of NBA heading coaching.

This coolness was further demonstrated the moment the 51-year-old found out that the backbone of his championship-winning team was jetting for sunnier skies in the red, white, and blue. Rather than melting down at the departure, like, say, a Dan Gilbert, Nurse treated the news like most of us treat a survey before a YouTube video.

Just ran into Raptors Coach Nick Nurse at Summer League – he told me he was watching a Prince impersonator at the Tropicana when the text came in about Kawhi choosing the Clippers. He said he read it, shrugged and figured he might as well stay & enjoy the rest of the show.

It would have been an act of the universe if the Prince impersonator was singing his 2002 song “Take Me With U,” but that cannot be confirmed nor denied.

I can only imagine how all this went down.

Wife: What’s that text about?

Nurse: Eh, nothing, our star player is ditching us after one season, deepening the belief that no player wants to play in Canada for longer than a cup of maple syrup.

Wife: ….you know this isn’t the real guy right.

(This sequence would all be worth it if just one of you picked up on my Meet the Parents reference.)

Nick Nurse in that moment pic.twitter.com/qYXcQqmzkD

Kawhi was done with the Nurse and wanted to go to the Doc instead.

Nick Nurse would be a fun guy to get stoned with. Is it legal in Canada?