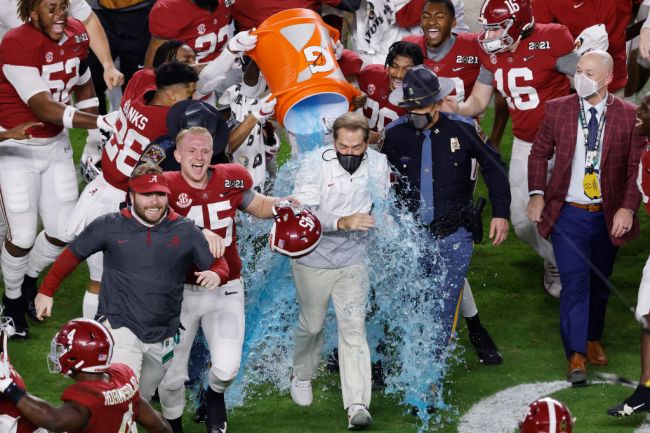 Nick Saban is officially the greatest coach in the history of college football. The 69-year-old won his seventh national championship on Monday and passed former Alabama head coach Bear Bryant to become the all-time leader. Saban earned his sixth title with the Crimson Tide with a dominant 52-24 win over the Ohio State Buckeyes, tying Bryant for the most at one school, but adds a No. 1 finish at LSU in 2003.

The lasting image from a college football season that almost wasn't. #CFBPlayoff pic.twitter.com/A25YsLLOQQ

It was a special year for the Crimson Tide. Quarterback Mac Jones and running back Najee Harris finished in the top five of Heisman Trophy voting and wide receiver DeVonta Smith won the award. All three had big nights against the Buckeyes’ defense in the win. Jones completed 36-of-45 passes for 464 yards and five touchdowns and Harris went for 3.6 yards per carry and two touchdowns on 22 carries. College football’s top player left the game with an injury early in the third quarter but still recorded an MVP-caliber game with a record-breaking 215 yards and three touchdown on 12 carries in essentially one half of play.

To put Saban’s dominance in his perspective, look at the last 16 years. He has reached a national title game in half of the nearly two decades and has seven rings. The other 129 active head coaches have six— combined. If that doesn’t do it for you, look at the record since he arrived in Tuscaloosa. There have been the same number of years that end with Saban and Alabama winning a championship as years where the Tide have not. Every other year, Saban gets a ring. Alabama has lost more than three games once in that same timeframe.

The win was even sweeter for Saban this year because of what they had to go through in a strange, shortened season. One of the biggest factors for success in 2020-21 was staying healthy. His team was forced to deal with multiple COVID-19 outbreaks, including his own positive test.

“The team that handles the disruptions the best is the team that is going to have the best chance to be successful in the end,” Saban said after the game. “And this team really did it.”

As a man who is not known to show emotion often, he broke down during on Monday.

If there was a debate before, there is not longer — Nick Saban is the best ever.