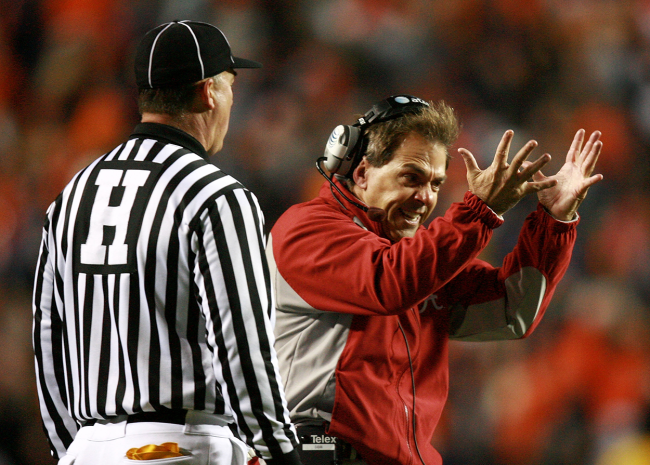 Nick Saban has been the head coach at Alabama since 2007 and has turned the Crimson Tide into a perennial powerhouse. The success in Tuscaloosa can go unsaid.

However, before Saban brought the first championship to Titletown, he was not nearly the household name that he is today. Yes, he won a national championship at LSU, but that didn’t mean much to the casual fans in the Yellowhammer State.

In fact, they had no idea who he was at the time.

Back in 2007, Saban’s first year in Tuscaloosa, Alabama lost a late season home game against the University of Louisiana-Monroe. Prior to that game, the Warhawks were 4-6 and had not won six games in a season since 1980.

For the Crimson Tide to lose to a team of that caliber was embarrassing and it was not a great look for a first-year coach. Obviously, it didn’t end up mattering because Saban has been more than successful since, but the loss raised some initial red flags.

During a recent appearance at a charity event, Nick Saban told a funny story about the haters he encountered after the Lousiana-Monroe loss in 2007.

Back in 2007, Saban was stopping for gas. He had his national championship ring from LSU on his finger.

When he got to the counter, the gas station employee asked about his ring. Saban explained and said that he was going to bring one back to Alabama.

Straight-faced, the employee looked at Saban and told him that Alabama wouldn’t win a national championship as long as Saban was the coach. He had no idea he was talking to Saban.

Here is the story from the G.O.A.T. himself:

Nick Saban shares a funny story about when Alabama lost to Louisiana-Monroe in 2007, his first season in Tuscaloosa. pic.twitter.com/JM6MXd4Hst

Clearly, the gas station employee was wrong. Alabama has won six national championships since he unknowingly made those comments about Saban to Saban.