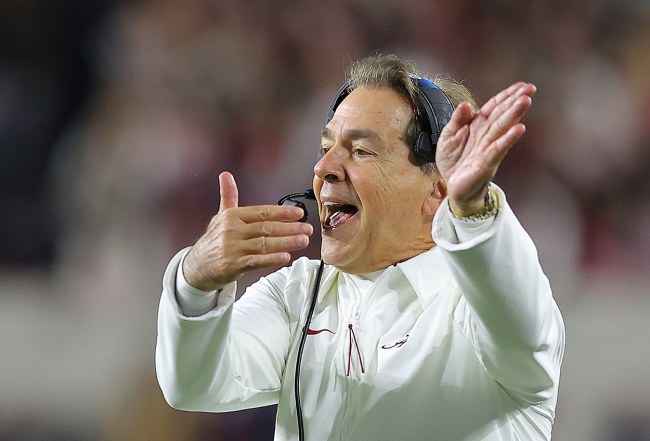 Over the course of the last two decades, Nick Saban has won seven national championships. That is more than one third of the total championships won in the last 20 years.

Over the last 11 years, Alabama has signed the nation’s top-ranked recruiting class eight times. In that same period of time, the Crimson Tide have produced three Heisman Trophy winners.

During an appearance on McElroy and Cubelic in the Morning, Saban spoke with his former Alabama quarterback and Cole Cubelic about the changes that are taking place in college football.

Specifically, Saban spoke about how he believes NIL threatens the competitive balance in college football.

.@AlabamaFTBL head coach Nick Saban joined @MacandCube from the @RegionsTrad this morning to speak on imbalances in college football and needing to protect the competitive balance of the sport.

“We’ve always approached college football with everyone being equal,” the coach said. “Everybody’s got the same scholarship, everybody gets the same Alston money, everybody gets cost of attendance, academic support, medical treatment, whatever it is. It’s always been the same. I think that there are things out there that have created inequalities in how we can maintain that.

“I’m all for players being able to make money in name, image and likeness and all that. If they earn it, they deserve it. But if we create imbalances, I think it will affect the competitive aspects of the game in a way that probably won’t be favorable to fans and the competitive balance that we’ve always tried to keep. Every league has it. Whether you’ve got a salary cap in the NFL or whatever it is, every league has some type of way to keep a competitive balance, which is what creates some parity and really makes the game exciting because of the kind of games you end up playing.”

Saban may not be wrong. The current landscape of college football is changing around the transfer portal and Name, Image and Likeness. He not the only coach to speak out against some of what is perceived to be going on around the country with “free agency” and pay-for-play.

However, to be complaining about the idea of “competitive balance” being threatened after playing in nearly 70% of national championships in the last 13 years is hilarious. Perhaps there is already a lack of competitive balance? Perhaps Alabama epitomizes that notion?