Nick Saban Doesn’t Know What To Do When He Retires, Makes It Sound Like He Wants To Coach Forever 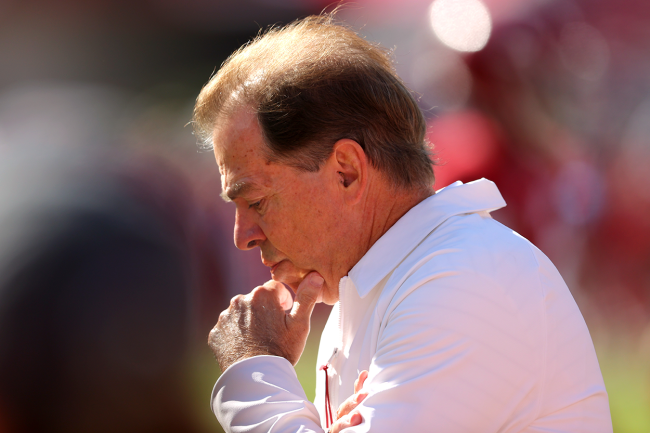 At 70 years old, Nick Saban continues to be the greatest college football coach of all-time and it doesn’t seem like he’s ready to give up that title anytime soon. The Alabama head coach recently spoke about his retirement and made it very clear that he hasn’t even thought about it yet.

Earlier this year, Saban spoke at the Alabama Football Coaches Association in Montgomery, Ala. on Jan. 27. Snippets of his speech have gradually leaked on social media, with his powerful comments about leadership being the most recent.

Another clip made its way onto Twitter on Monday but has since been removed. In the video, Saban discusses the idea of hanging up his play sheet and riding off into the sunset.

Rather, he discusses how he is not hanging up his play sheet and riding off into the sunset. He spoke about life after retirement and said that the new challenges as a coach are what keeps him going.

Saban said that when he retires, he is going to have no idea what to do. In turn, he asked why he would retire.

Here is what he had to say about the topic:

“Everybody asks me when I wanna retire. Retire from what?” said Saban. “I’m gonna jump into an empty abyss, aight, of what am I going to do? Because the very challenges that I talk about and the things in our profession that concern me – for you and for me both, in your game and our game – that’s what keeps me going. That’s why I get up every day. That’s why I can’t sleep at night sometimes. So why would you quit doing that? I haven’t figured that one out yet.”

Saban and Alabama are coming off of a two-loss season. The Crimson Tide was upset by Texas A&M during the regular season and then lost to Georgia in the College Football Playoff National Championship.

Although there are some integral players from the 2021 roster moving on to the NFL, much of Alabama’s roster remains in tact for 2022. Especially on offense with Bryce Young leading the way at quarterback.

With yet another national championship run very much in the cards, Saban certainly isn’t going to retire before next season. If he gets another ring, the speculation may begin to ramp up once again.

However, based on what he said in Montgomery last month, it seems like Saban is going to coach until he physically can’t anymore. And if you have seen him on the sideline recently, he is not showing signs of slowing down.