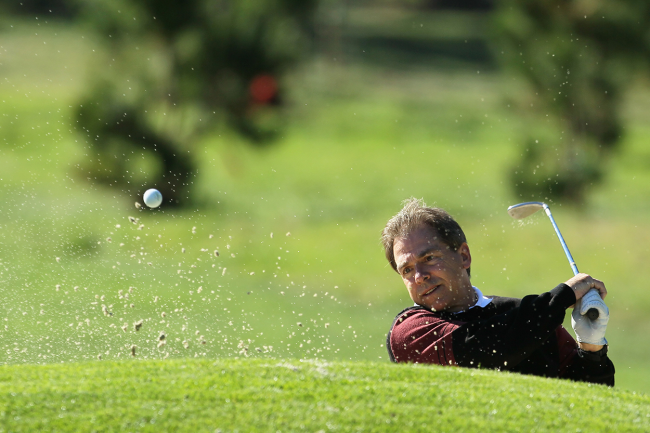 Nick Saban loves to golf. He has played the sport for quite some time and rarely turns down an opportunity to showcase his skills.

That was the case on Wednesday as he took to the tee for a high-stakes bet with Kirby Smart at the Regions Tradition Celebrity Pro-Am in Birmingham. Prior to his round in Alabama, Saban played a tune-up at Augusta National with an MLB Hall of Famer.

While discussing the warmup round, Saban said that he usually gets out to Georgia and plays at the home of The Masters once a year. Tiger Woods also makes an annual trip to Augusta.

Although the two have never played that particular course together, Nick Saban and Tiger Woods have played a round of golf with one another in the past.

Back in the late 90s, Saban was the head coach at Michigan State. As he was getting ready for fall camp, he received an invitation to play in a Pro-Am about an hour north of Detroit.

Because the practices were nearing close, Saban initially declined the invitation. But then he found out who his partner would be and it changed everything.

He discussed what went down during an appearance on McElroy & Cubelic In The Morning earlier this week.

“When I played in the Pro-Am when I was at Michigan State in the old Buick Open in 1997 or 1998, it was the first time Tiger won the Masters and he was like 22 or 23 years old,” Saban said. “This was like the weekend before we started fall camp, so they call and say, ‘Will you play in the Pro-Am?’ And I said, ‘I can’t play then. We’ve got practice starting in three days.’ And they said, ‘Well, if you could play with Tiger, will you play?’ And I said, ‘Yeah.’ That was my favorite Pro-Am, and it was quite an experience. His caddie was Fluff in those days, who was a great guy. It was really a lot of fun.”

Despite playing 18 holes together back more than 20 years ago, Saban and Woods aren’t particularly close like that. The 70-year-old head coach often brings well-known athletes and celebrities to talk to his team.

Saban would love to get Woods in Tuscaloosa, but he doesn’t have the pull.

“I don’t think there’s anyone maybe in any sport that was as dominant as he was for as long as he was,” Saban said. “And anybody that can accomplish that because it’s so hard to – success is not a continuum, it’s momentary. So to keep yourself being able to stay so well-prepared, to practice, do the things you need to do to stay so competitive, to stay hungry, I mean to have the mental toughness to stay focused all the time for so long.”

“And what he accomplished this year at Augusta in the Masters, coming off his injury to make the cut and to do what he did, regardless of what his score was, was pretty phenomenal in terms of what kind of person, what kind of character, what kind of competitive character the guy has.”

“I would love for him to be able to share some of that, but I don’t really have the kind of relationship with him that I’ve had with some of these other guys to get him to do it.”

Maybe one day the greatest golfer of all-time will be on the sideline at Bryant-Denny Stadium alongside the greatest coach to ever do it on the gridiron. Just not today.