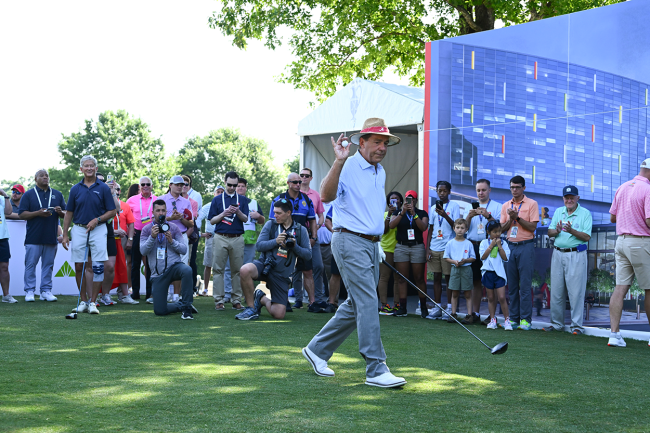 Nick Saban is an avid golfer. Over the course of the past few years, he has been an annual participant in the Regions Tradition Celebrity Pro-Am in Birmingham.

2022 was no different. The head coach of Alabama took the course on Wednesday morning, but this year, he had a unique warmup round in his bag.

Prior to taking to the first tee at Greystone Golf and Country Club, Saban swung by the most famous golf course in the world.

During an appearance on McElroy & Cubelic In The Morning, Saban revealed that before the Pro-Am, he hit the links at Augusta National Golf Club. And he did so with a Major League Baseball Hall of Famer.

“I just played Augusta yesterday with Ken Griffey Jr.,” Saban said. “He was my partner, thank God. I met him a couple of times. He has a couple of sons that were prospects, and I got to meet him along the way. But he’s a really good guy and really good golfer, and we had a lot of fun. But most of the time, people complain about three-putts, but when you have multiple four-putts, that’s something you don’t even want to talk about.”

After playing alongside Junior in Georgia, Saban hopped on a plane to Alabama for his round on Wednesday.

Also playing in the Pro-Am was Georgia head coach Kirby Smart, who of course beat Saban in the CFP National Championship back in January. They decided to put some stakes on their Wednesday round, but the former came to that decision before the latter found out.

Competitive on the football field and the golf course.@AlabamaFTBL coach Nick Saban and @GeorgiaFootball coach Kirby Smart have a $1,000 bet today.

Saban found out on the second hole. pic.twitter.com/8P6st3BZoj

Unfortunately, there is no telling how either of them finished on the day. The final scores never went public and we will never know which coach ended up leaving Birmingham $1,000 richer.