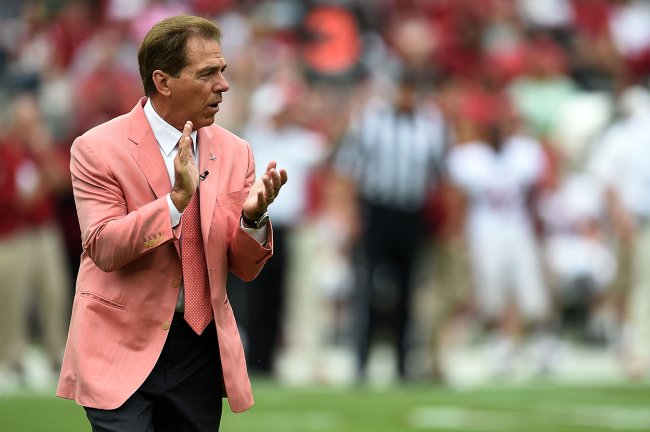 Although he doesn’t rock a suit on the sidelines during the regular season, Nick Saban always brings the drip for Alabama’s ‘A-Day’ spring game. Every year, the head football coach of the Crimson Tide comes out dressed to the nines.

Somewhere along the way, Saban adopted a new tradition. Not only does he wear the suit, but the jacket that he pairs with the suit is always a little bit flashy.

Can’t wait to see what Nick Saban is wearing for A-Day tomorrow 🐐🔥 pic.twitter.com/0lOHAuxX3s

In particular, a pastel jacket has become what to expect from the 70-year-old.

Here is a breakdown of what he has worn in the past:

Can we talk about Nick Saban absolutely WEARING this pink suit during A-Day?! pic.twitter.com/C12umg7JAY

As a result of his fashion history, one of the biggest storylines leading up to the 2022 A-Day on Saturday was what color suit Saban will wear. He was asked about the origin of the pastel suit jackets — particularly the pink — during a public appearance earlier this week and his response was perfect.

Saban said that his wife, Miss Terry, is behind the entire wardrobe.

Miss Terry watching everybody rave about Coach Saban’s suit knowing she picked it out pic.twitter.com/4lWtaw8L5m

He just follows her advice and goes with whatever she picks out.

“Hey, Miss Terry does that,” Saban said with a smirk. “I just do what she tells me.”

Miss Terry is the first lady of football and although she doesn’t get too involved with Alabama football’s day-to-day operations, she does handle a large portion of A-Day. Her duties include making sure that Saban brings the heat to the sideline.