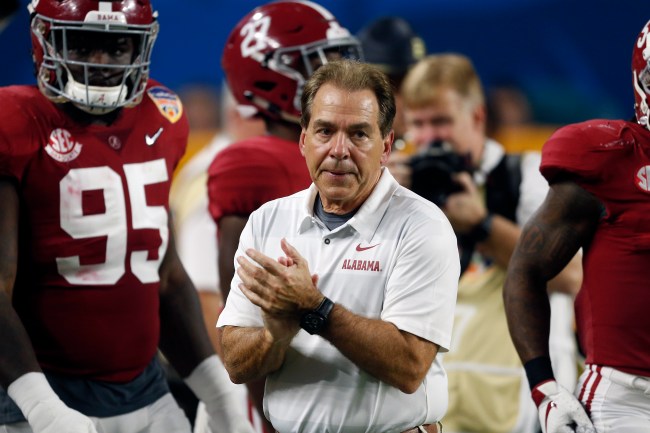 Nick Saban is as close to a football god as you’ll probably find. I know, that’s a huge statement to make, but, c’mon, the dude has won six national championships in his career, has built the premier program in college football with the Alabama Crimson Tide and, given the fact he’s not showing any signs of slowing down, it’s safe to say he’ll only add more accolades before it’s all said and done. To suggest that Saban’s just a little smarter than some of the fellow head coaches out there is an understatement.

And, if you ever doubted how much of a football genius Nick Saban actually is, allow him to showcase his brilliance for you in a new E:60 segment entitled “Tell Me A Story,” where ESPN cameras had the Bama head coach tell a interesting story about himself that most people probably don’t know. It’s peak Saban, as the 67-year-old coach recalls a play he once ran as a 15-year-old in high school, when he was the starting quarterback for Monongah H.S. in West Virginia. Take a look below.

Nick Saban was a football genius … even at age 15. (via @E60) pic.twitter.com/mOsVyOdOGa

Seeing as how Nick Saban seems to follow this philosophy anytime a late-game situation comes up and his team needs to make a play, it’s incredible that he developed that mentality so early on in his playing days. Likewise, it proves that he simplifies things, sticking with his gut, rather than try to outsmart the opposing team, or over-think things as most coaches do.

Yep, this is why Nick Saban’s Nick Saban, and everyone else is just trying to catch up. It’s also why a guy like Los Angeles Rams head coach Sean McVay is considered a football guru, too, because, like Saban, the NFL coach has shown to have a photographic memory of plays over time, which is insane to see.

Half of us can’t even remember what we ate this morning, yet here are football coaches rattling off key plays from years ago. Yeah, we should all feel pretty inferior about that.