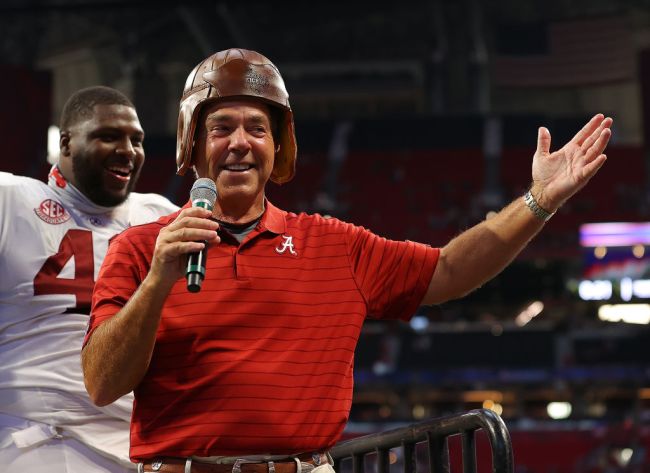 There is nobody on earth (except maybe politicians) who can dance around a question quite like football coaches. No matter what is being asked of them, football coaches can find a way to respond without really saying anything at all.

Nick Saban, the greatest college football coach of all-time, is no exception.

The 69-year-old has been in headlines this week, but not as much for the Crimson Tide’s matchup with the No. 11 Florida Gators on Saturday. Instead, the focus has been around Saban’s love of ‘Deez Nuts’ jokes.

We have known about his sense of humor since Josh Jacobs shared his affinity for the classic quip in 2019. This week, however, Alabama safety Jordan Battle reminded everyone of Saban’s fondness for the joke.

Now, two days ahead of the team’s biggest game of the year thus far, Saban took time to address his humor. His answer was as vague, and open-ended as you might expect.

…. even though it clearly refers to ‘Deez Nuts.’

Nick Saban on Jordan Battle noting Saban’s use of “suck on deez” this week:

48 hours ahead of what might be the most difficult game on Alabama’s regular season schedule, Saban could have easily taken the chance to go off on one of his famous media tirades. He also could have publicly reprimanded Battle for bringing his favorite joke back to the forefront of conversation.

Instead, he actually leaned into the hilarity and had some fun with it. It was rather refreshing. Who are you to say what ‘Deez’ are, anyway?

Saban has essentially admitted to making the jokes before anyway, so it doesn’t really matter. He joined Dan Patrick in 2020 and said that he likes to “have fun with the players.”

One of the questions DP posed to Nick Saban this morning was "Would you like to comment on 'deez nuts'?" He answered as followed 😂😂

So yes, Saban makes ‘Deez Nuts’ jokes and it’s a great reminder that he is human, even if he does lose his mind on his players while leading by 40 against an FCS team.

Nick Saban was Not happy with the defense in the 2nd half against Mercer… pic.twitter.com/YjjqozaYHB

Alabama plays Florida in the CBS slot at 2:30 CST on Saturday. Will he hit Man Dullen with a ‘Deez Nuts’ joke? Tune in to find out.