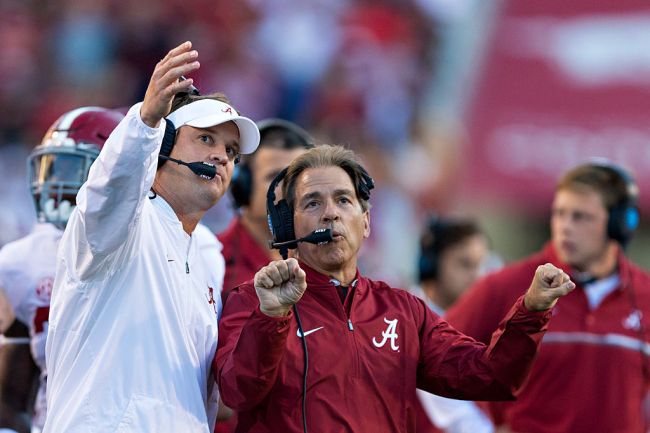 Alabama head coach Nick Saban is the undisputed greatest of all-time. His seventh National Championship this past season gave him one more than Bear Bryant, making it hard to hate him— unless you’re an Auburn fan.

At the very least, like him or not, you must respect him. Especially after we found out how much he loves to make “deez nuts” jokes.

Former Crimson Tide running back Josh Jacobs, who is now with the Las Vegas Raiders, first shared Saban’s love for the classic quip on the Dan Patrick Show in 2019. A year later, Dan Patrick asked the head coach about his joking side, which one might not expect, and Saban gave an explanation.

Now, thanks to Lane Kiffin, we have some insight as to where Saban’s love of “deez nuts” jokes originated. Kiffin, who served as the offensive coordinator in Tuscaloosa from 2014-2016, first joked about Battle’s comments on Twitter.

And then, during a press conference on Wednesday, Kiffin was asked about his response. He explained that it was current Baltimore Ravens cornerback who first introduced Saban to “deez nuts” jokes.

Lane Kiffin, asked if he has a favorite joke of Nick Saban's from their time together, recalls that Saban got the "deez nuts" jokes from Marlon Humphrey, apparently.

"As the player referred to (yeterday), he says it very often — and must be doing it years later."

Humphrey responded to the report and couldn’t help but laugh.

Thank you, Marlon, for the greatness that is a mental image of Nick Saban walking around making “deez nuts” jokes.