Nick Saban Is Really, Really Not A Fan Of Ripped Jeans 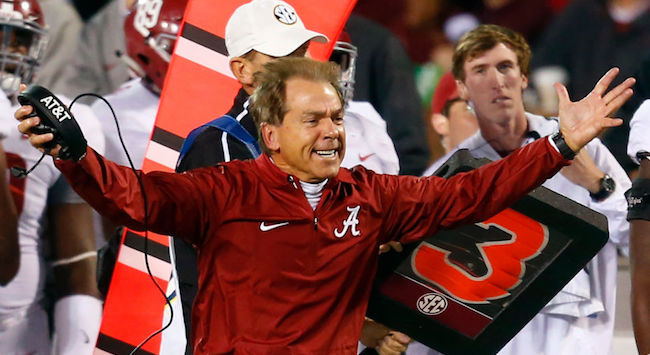 The number one ranked Alabama Crimson Tide are set to take on the not at all ranked Mercer Bears on Saturday, an FCS team that— at least to my knowledge— hasn’t done anything to deserve the punishment that Bama will inevitably dole out. Mercer will get $600,000 for their troubles, which answers the question of how much pride is really worth.

While I like to think the only thing Alabama players are doing to get prepared for the game is playing against their upcoming opponents in a modded version of NCAA Football 14 (RIP), it appears that everything is business as usual down in Tuscaloosa. Nick Saban stepped to the podium yesterday afternoon to address reporters during his weekly press conference (he chose not to arrive in a helicopter this time), but before he answered any questions, he apparently had to get something off of his chest.

Saban— flanked by contractually obligated bottles of Coke™ and Dasani™— decided there was no better time to complain about people wearing ripped jeans in an Old Man Rant for the ages.

Must see: Nick Saban opens press conference with his disdain for worn-out jeans… then cracks himself up 😂 #Alabama #RollTide pic.twitter.com/BtUgj6fT9j

Here’s the statement in full:

“I just want to know how we got here. Not to offend anybody out there, but I just walked by some jeans — worn out jeans. Holes in them. All cut up. I just remember when I was a kid in West Virginia, I was ashamed to go to school because my jeans were wore out, only because we didn’t have any better. Now they buy them that way. How’d we get here? I don’t know.”

I’m not sure how Saban is just realizing ripped jeans are a thing, but I guess it’s better late than never. As much as I’d like to think there’s some deep lesson here like the parable he shared in the wake of Hurricane Harvey last month, I think Saban just really hates ripped jeans.

I can’t wait to hear what he has to say when he discovers zip-off cargo pants exist.