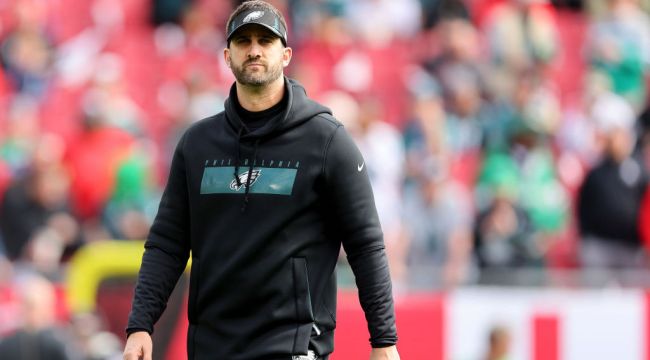 While the quality of the NFL’s refs have been a point of contention all season, that conversation has only intensified following Saturday’s mistake-riddled game between the Cincinnati Bengals and the Oakland Raiders.

The questionable officiating continued on Sunday during the Wild Card matchup between the Philadelphia Eagles and Tampa Bay Buccaneers, as a handful of first-half flags were disputed by commentator Troy Aikman and FOX NFL rules analyst Mike Pereira.

Eagles head coach Nick Siriani is also obviously frustrated with the refereeing. Following a holding call against wide receiver Quez Watkins in the third quarter, NBC Philadelphia reporter John Clark tweeted a video of what he described as Sirianni being “held back” from the officials.

Nick Sirianni had to be held back from the officials after that pass interference penalty on Quez Watkins pic.twitter.com/AglrQhDoFl

Now Quez Watkins gets called for pass interference and Nick Sirianni has had it with the refs#Eagles #FlyEaglesFly pic.twitter.com/ToU0b1Gbgb

Leading the Eagles 31-0 in the third quarter, the Bucs will likely advance and play either the #4 seed Los Angeles Rams or #5 seed Arizona Cardinals in next weekend’s Divisional Round game. The Wild Card Round games will continue with a Sunday afternoon matchup between the #3 seed Dallas Cowboys and the #6 seed San Fransisco 49ers. Then, Ben Roethlisberger and the #7 seed Pittsburgh Steelers will close on Sunday’s action when they head down to Kansas City to take on Patrick Mahomes and the #2 seed Kansas City Chiefs. Super Wild Card Weekend will then conclude on Monday night when Kyler Murray and the Arizona Cardinals take on Matthew Stafford and the Rams in L.A..

RELATED: NFL Ref Jerome Boger And His Crew Not Expected To Work Again During Playoffs After Major Screwup In Bengals-Raiders Game