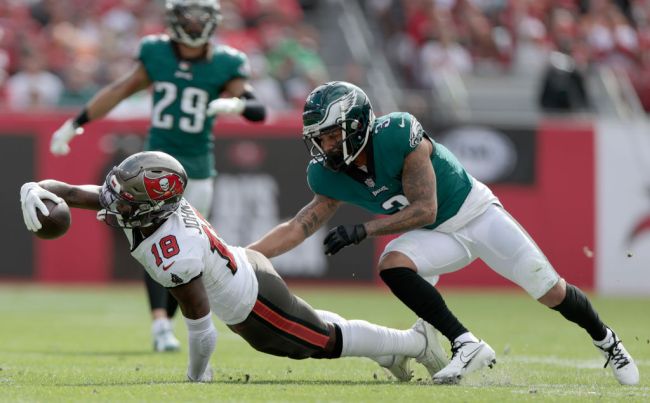 Following yesterday’s game between the Cincinnati Bengals and Las Vegas Raiders — which saw Jerome Boger and the rest of his crew receive widespread criticism following their officiating of the game — the NFL’s refs are back in the spotlight on Sunday with some questionable calls of the first half of the Eagles-Bucs game.

Early in the game, a flag was thrown for roughing the passer on Tom Brady, but both commentator Troy Aikman and Fox’s rules analyst Mike Pereira disagreed with the call:

A QB is given low hit protection immediately following a pass, which is defined at the knee or below. Brady was hit in the thigh here, so this should not have been roughing the passer pic.twitter.com/EThL9kSDNu

Then, in the second quarter, with the Eagles desperately in need of some positive momentum, had a decent Dallas Goedert catch wiped away by a holding call on center Jason Kelce. Aikman and Pereira, again, disagreed with the call.

Refs with another bad call on Jason Kelce; replay shows he was not actually holding https://t.co/2M31jPZMuz

Just a play or two later, the Eagles had another holding penalty called against them, this time on wide receiver Quez Watkins, and Philadelphia head coach Nick Sirianni had to be “held back from the officials,” according to NBC Philadelphia reporter John Clark.

Nick Sirianni had to be held back from the officials after that pass interference penalty on Quez Watkins pic.twitter.com/AglrQhDoFl

Unable to get anything going, the Eagles went into halftime down 17-0. Super Wild Card weekend will continue later this afternoon with a matchup between the Dallas Cowboys and San Francisco 49ers, followed by the nightcap, which sees Ben Roethlisberger in his final NFL game heading to Kansas City to take on Patrick Mahomes, Travis Kelce, and the Kansas City Chiefs. The first round of the NFL Playoffs will then conclude on Monday night when the Arizona Cardinals head up to Los Angeles to face off against their NFC West rivals, the Rams.

RELATED: NFL Ref Jerome Boger And His Crew Not Expected To Work Again During Playoffs After Major Screwup In Bengals-Raiders Game