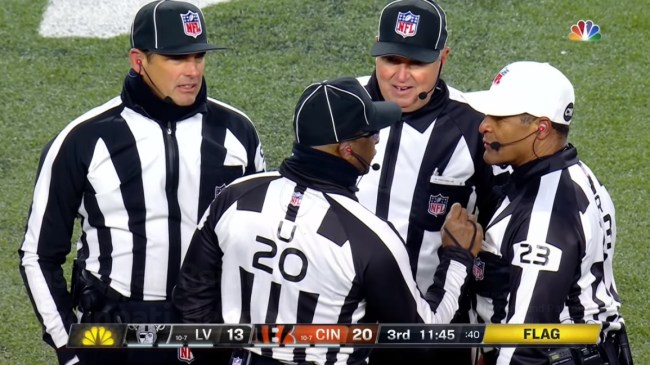 It appears that NFL ref Jerome Boger and his crew will be sidelined for the rest of the playoffs after a disastrous Saturday night.

During the Bengals-Raiders game, someone on Boger’s crew inadvertently blew a whistle while the ball was still in the air during a Bengals TD pass.

The officials allowed the touchdown to be awarded to the Bengals because they felt the whistle came after the receiver had caught the ball, which was clearly not the case.

The refs said the whistle came "after the receiver caught the ball." pic.twitter.com/xZmblLnlAs

Less than 24 hours after the botched call, ESPN’s Adam Schefter is reporting that Boger and his crew are not expected to work again this postseason after their screwup on Saturday.

Referee Jerome Boger and the officials from Saturday’s Raiders-Bengals game are not expected to work again this NFL postseason:https://t.co/oPdfnJxQD7

Referee Jerome Boger and the crew that worked the AFC wild-card game between the Raiders and Bengals are not expected to officiate again this postseason after their problematic performance Saturday highlighted by a controversial whistle.

The NFL grades officials after each game, and Boger and his crew are not expected to receive high marks for Saturday when they ruled that a whistle occurred after Cincinnati’s Tyler Boyd caught a touchdown from Joe Burrow — although replays appeared to show otherwise.