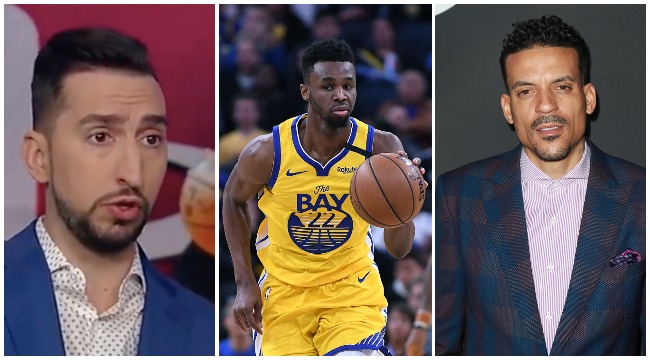 Andrew Wiggins is not a bad basketball player. Andrew Wiggins may have fell short thus far of #1 pick expectations, but saying he is “bad” must come from the mouth of a helpless prisoner of the moment or someone who is rewarded for poking the hornets nest at the expense of another man’s livelihood.

Nick Wright is both of those, and Matt Barnes is the Queen Bee.

"Andrew Wiggins is a bad basketball player. He's owed $95M over the next 3 years, starting next year. It's unspeakable the Warriors did this. … It's over for them now. We will never see Steph in another NBA Finals again. Ever." — @getnickwright pic.twitter.com/mqu5qkEYm9

Will anyone with a blue check mark take the bait? Of course they will. This is the internet.

You’re an analyst too, now, Matt. And if you can’t see past Wiggins’ counting stars, you must not be a very good one.

The fact that Nick Wright thinks NBA players are just 100x better at basketball than him tells you everything you need to know about the dude.

If you think I’m “crossing a line”, that’s your call to make, but I I’ve always been fair & honest with what I say, and if it rubs your pal KD or a few others the wrong way, so be it.

But to act like I’m saying “I could do what they do.” is absurd & patently false.

Save all that pal talk. When it comes to disrespect choose your words wisely & remember where you live Nicolas!

How do you know where he lives, Matt? Was your ex-wife banging him?

Ok, that was mean. I take that back.

Uh oh. Nick Wright has made another enemy in Kendrick Perkins.

Nick post my numbers in my career and you can call that a train wreck!!! I don’t give a damn what you say a player that’s averaging 19.7 points a game over his 6 year career and shooting 44 percent is not a BAD BASKETBALL PLAYER.