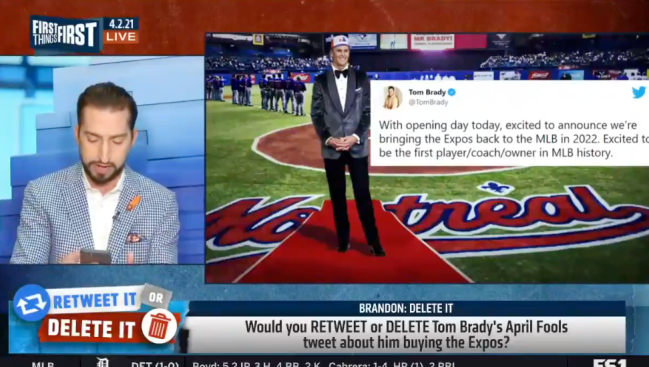 You may have forgotten, or not even known, that Tom Brady was actually drafted by the Montreal Expos in the 18th round of the 1995 MLB Draft. Well, Brady reminded the world of that feat with an April Fool’s Day joke on Thursday explaining that he was going to bring the franchise back to Montreal and be a player-coach-owner for the team in 2022.

With opening day today, excited to announce we’re bringing the Expos back to the MLB in 2022. Excited to be the first player/coach/owner in MLB history. pic.twitter.com/Sre5y5LUL2

It’s very obviously a joke, one that Expos fans may not have really appreciated, but not everyone seemed to be a fan of his April Fool’s Day prank. Fox Sports’ Nick Wright was one of those people. Not only did he go on a rant about how corny the joke was – which it was extremely corny – Wright went on to block Brady on social media live on air during Friday morning’s edition of ‘First Things First.’

"I don't ever wanna see any of this again. Blocked!" pic.twitter.com/pgdaryFNlD

While Brady’s joke was corny, so too was Wright’s cringey rant about it. It was all unbelievably corny.

Also, good luck blocking Brady from social media. You could find a way to mute every phrase mentioning him and blocking all of his accounts, but that man is always going to be present on your social media feed no matter what, that’s just part of being the GOAT.