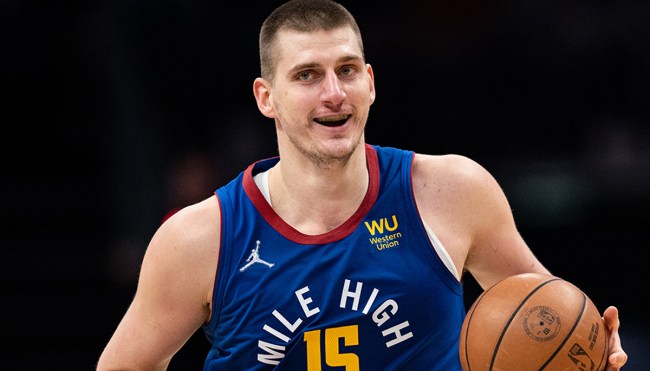 The Denver Nuggets took on the Memphis Grizzlies on Tuesday night and Nikola Jokic went bonkers again. He might have made the sickest assist in NBA history as well.

This dime is so good that NBA fans immediately began calling him the MVP.

NBA on TNT shares the highlight play. Nikola Jokic catches a pass and immediately throws it between his own legs to a wide-open teammate. This is the type of thing you’d expect to see in a Harlem Globetrotters game. Instead, we have Jokic out here dropping dimes like this in the middle of a professional NBA game.

A pass like that is unfathomable. It happened so quickly that Nikola Jokic saw the play develop that way before anyone else did on the court. On top of that, he put up monster numbers once again. The Nuggets’ star is playing so well right now, that he’s apparently putting up Wilt Chamberlain-like numbers, per ClutchPoints.

Nikola Jokic has won the MVP award in back-to-back seasons. Regardless, NBA fans are ready to give him that crown for a third consecutive time. Between his Wilt Chamberlain-like performances and that insane pass, it’s hard to argue against them.

He’s winning another mvp this season

We’ll see how the MVP race plays out. If Nikola Jokic can secure a third MVP award in a row, he’ll be joining Bill Russell, Wilt Chamberlain, and Larry Bird, as the only players in NBA history to win the award three straight times.

Look for Jokic to keep the hot hand rolling as the Nuggets take on the Portland Trail Blazers on Friday night.