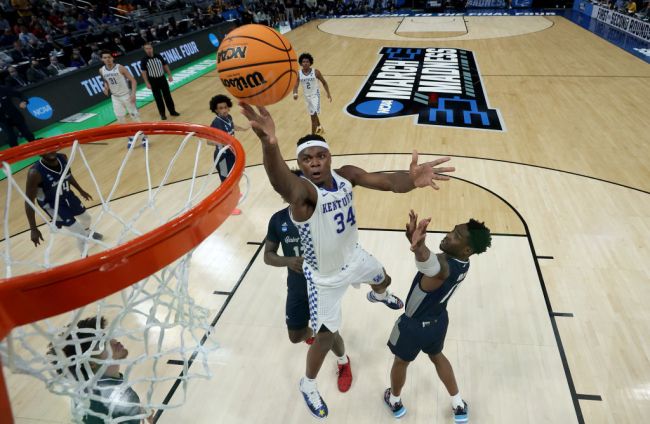 The University of Kentucky’s hopes to avoid another early end to their college basketball season got a huge boost today.

According to 247Sports’ Travis Branham, college basketball National Player of the Year Oscar Tshiebwe will be returning for his senior season at Kentucky after securing an NIL deal that will pay him 7 figures.

Huge news in Lexington with the return of NPOY Oscar Tshiebwe to Kentucky.

Been a lot of headaches with NIL but this is one cool story enabling him to make more than (likely) seven-figures to provide without having to chase a high risk Draft stock.

According to Stadium’s Jeff Goodman, the deal is expected to be worth around $2 million.

Oscar Tshiebwe will likely earn in the neighborhood of $2 million this season through NIL, source told @Stadium. https://t.co/MHlbaJa7RO

This is a really smart move for the star of Kentucky’s basketball program. He is currently projected as an early-mid 2nd round pick if he were to enter the NBA Draft. The contracts that come with 2nd round NBA picks can be somewhat unpredictable and it’s tougher to break into an NBA lineup as a 2nd rounder.

Instead, he now gets another year at Kentucky to improve his draft stock and try to break into the 1st round while getting paid a whole bunch of money to do it.

The miracle run of Saint Peter’s took away Tshiebwe’s chance to boost his stock in this season’s NCAA Tournament. Next season he should get a bit more screen time during the tournament as Kentucky will surely be expected to make a deeper run than this past season.

Hopefully Tshiebwe’s decision to stay at Kentucky will start a trend among top college basketball players who aren’t viewed as the strongest draft prospects. They’ll finally get paid well to stick around and college basketball fans will get to continue enjoying watching them play at the college level.